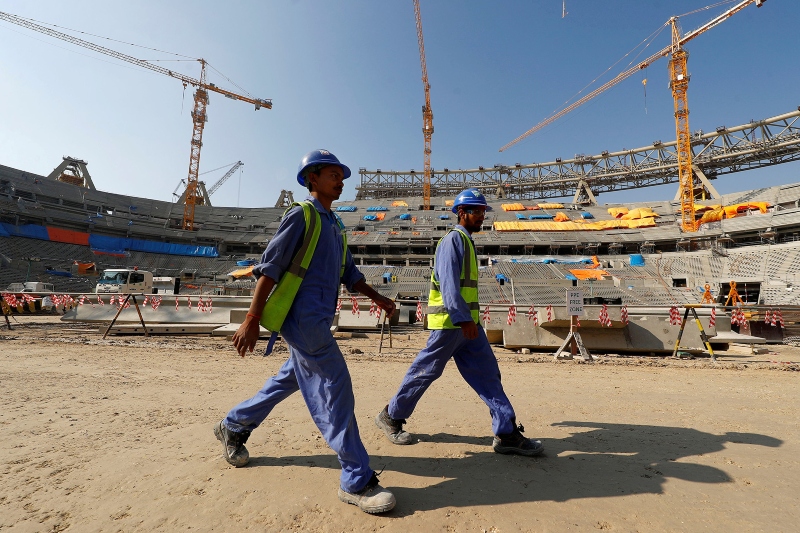 Qatar – The upcoming FIFA World Cup 2022 has all the preparations being recorded in Qatar but yet somehow the most focused group seems to be the migrant workers who are working relentlessly in Qatar for the construction of the stadiums.

As the date to the first match comes closer cases where people seem to criticize Qatar for violation of human rights are increasing. The top layer of the rulers of Qatar have been also targeted for the same but no official statement came to either discuss the matter or even address it.

Qatar has been claiming that it has made significant labor reforms in order to ensure that the laborers are working under proper safety measures and are given allowance but nothing has been oplemneted till now. Qatar has one of the largest migrant forces in the Arab world with around two million people working in various sectors and yet such loose treatment of their rights is deeply alarming.

Heat is a huge concern for them and to add to that, distance from where theri accommodations are to where they have to reach is also a lot and hence that is increasing the workload of troubles for them. Most of the migrants come from India, Bangladesh, Nepal, the Philippines and Kenya and are not accustomed to such treatment or climate.

Last week on Friday, horrific details about their treatment of the workers were revealed in a report by the International Labor Organization. The United Nations agency stressed that nearly 50 migrant workers have died in each sector last year and the cases have been classified as work related accidents. The realities are known to none but still the classification reveals how negligent authorities are about the safety measures.

The report also revealed that there have been 38,000 work-related injuries last year, 500 of them classed as severe. Even though the report did not specify how many of these cases were linked to the construction workers involved in the stadiums for the FIFA world cup but going by the time duration of the accidents, it can be gathered that most were linked to the World Cup.

May Romanos, an expert in the matter and researcher for Amnesty International said, “These men are seemingly healthy, they have passed their tests to work in Qatar, and yet they die at a young age and their death certificate just states either natural causes, cardiac arrest or respiratory failure.” It is not surprising because even a medical expert from Nepal had stressed that such incidents do occur. This was after one of the migrant workers from Nepal was suffering from Kidney stone and other health complications after he returned from Qatar while he was alright when in Nepal.