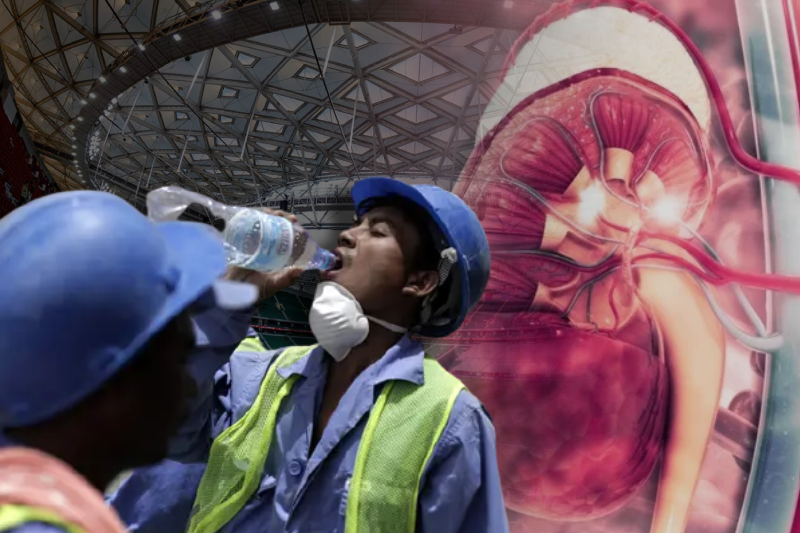 nepali workers risk as they from qatar’s world cup stadium

Nepal – Workers who were responsible for nominating and constructing the World Cup stadiums in Qatar for the FIFA event have started to return to their hometowns as their term comes to an end but it is not all good news for them.

One of the migrant workers from Nepal, Amit Magar said that Qatar is being neglectful towards the health of the workers. He told this to one of the report writers of the matter Louis Callaghan, who is known to have disclosed horrific incidents of the lives of migrant workers in Qatar. He had recently published a report titled “Death for the Qatar 2022 World Cup,” after which all the details about the treatment of the migrant workers came into picture.

Magar confessed in front of the British writer that there are extreme breaches of human rights in Qatar. He has been working in the stadiums of the upcoming World Cup in Qatar on contract basis and recently made his return to Nepal where he was diagnosed with Kidney failure.

He has to go through three dialysis sessions at a hospital in Kathmandu which is already an economic hurdle for him and his family. He has also been told by the doctor that he is at an increased risk of heart attack or stroke. He was clueless about what he was going through when he left Qatar, revealed the author.

The 24-year-old Magar was promised $300 a month when he went to Qatar where he was also shown dreams of getting a decent place to stay. This was the compensation for him in return for the work he would do as carpenter at the Al Thumama Stadium, one of eight stadiums being built for the FIFA World Cup.

The young man was definitely attracted to Thai prospect and wanted to try his hands on the opportunity, however, it only led to disappointment. He expressed that it was nothing short of living hell in Qatar as they were asked to continue working despite the heat waves and burning temperatures, which was life threatening for them.

A medical professional from Kathmandu, Dr. Prateek Singh talked about the possible reasons that could have led to this disease. He said, “Most of the migrant workers were working 12-15 hours a day without drinking enough water, hardly a liter or two a day, and in these harsh conditions, I think this was the case. The main cause of the disease.” The report further went on to emphasize how these migrant workers are leaving the country in a healthy state but when they are returning, they are returning in broken form.