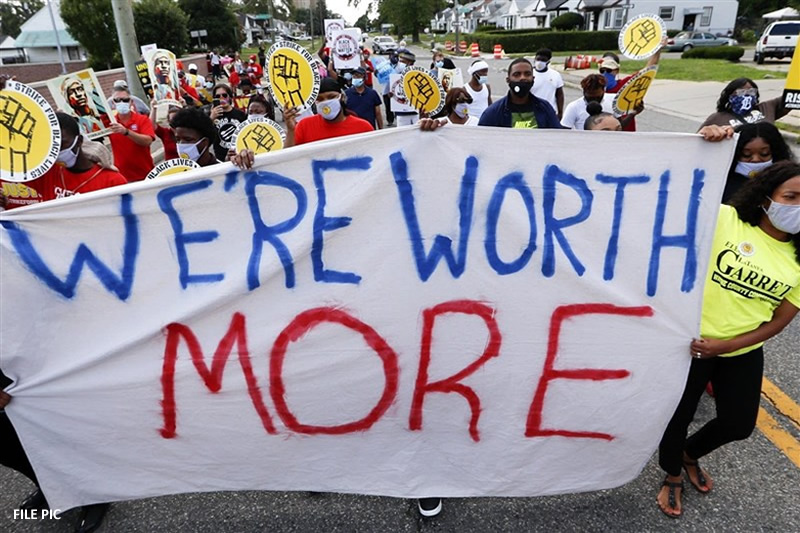 more than 10,000 workers protest in us demanding fair pay and healthcare provision

United States – In US, near to 60,000 TV and film crew workers are set to strike on Monday, while 24,000 nurses might protest. It was also observed that 10,000 workers at farm equipment walked out from work over wage issues and working environment. Rise in US Union activity is seen as it has been decades since their payment was revised.

The staff demanded for better rights and healthcare cover during the Covid-19 but not all employers have provided it. Employers are caught in the twist and have and forcefully had to revise the wages for the lowest paid ones in the sector.

It was reported in early October that thousands of other workers were already on strike, including 700 nurses in Massachusetts, 2,000 New York hospital workers and 1,400 Kellogg factory workers in Michigan, Nebraska, Pennsylvania and Tennessee.

Richard Bensinger, an organiser at Workers United, mentioned that the wave of strikes was reminiscent of the 1930s, when industrial action was commonplace in the United States. Similarly back then the vast divide between the wealthy and the working class became intolerable. The decades-long decline of living standards for workers is not sustainable.

The proportion of the American workforce that belongs to a union remains very low whereas the number of workdays lost as a result of strikes has remained near historical lows since 2002. It is should be noted that most employees under this contract have unparalleled, no-cost comprehensive health insurance, while less senior employees have the same health insurance as our salaried employees, but with much lower employee contributions.

Management responds to these requests by saying that their proposals not only maintain these industry-leading level of pay and benefits, but offer significant increases in wages, benefits and retirement.