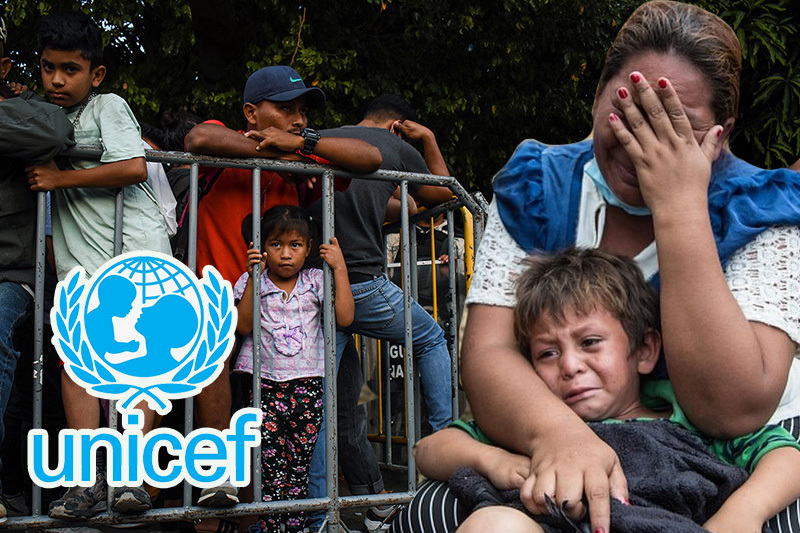 children make up a third of migrants in

Global – Millions of people worldwide are fleeing their homes in search of safety and prosperity in other nations. About 82.4 million individuals who have been forcefully displaced are forced to leave everything they know in search of a better life, from Syria and Ukraine to Venezuela and Haiti.

They wind up at Tapachula, an ancient metropolis of 350,000 inhabitants located fewer than 20 miles from the Guatemalan border. Additionally, Nogales, Sonora, which is on the U.S. border, is more than 2,000 miles away.

Each year, hundreds of migrants heading north use Tapachula as their entry point into Mexico. All must wait in Tapachula for Mexican immigration officials to complete their petitions for documents to work in the nation or leave the city, despite the fact that many have intentions to travel to the U.S.

It frequently takes months to schedule the required appointments with them due to the excessive number of migrants and refugees that are overloading the immigration system. Public parks are being used as sleeping areas, local shelters are full, and emotions appear to be just getting worse as the process continues.

According to UNICEF, roughly a third of people stranded in Tapachula, the scene of one of the worst humanitarian catastrophes in the Western Hemisphere, are under the age of 18.

Some children can find room in one of the city’s shelters when they are travelling with parents or more senior family members.

He remarked, “My situation has been challenging, it was unexpected, but with God’s support I’ve kept going.”

At the refugee and asylum seeker shelter Hospitalidad y Solidaridad, Carlos spends his days. In a day and a half, he and his cousin walked from Honduras via Guatemala to Mexico.

I didn’t have time to digest everything that had transpired, so I had an anxiety or depression episode two or three days ago, he claimed. “Then it struck me: going outside and not acting like a prisoner who is caged up. But now that I’ve calmed down, thank God, I’m forced to come here and, due to the circumstances, I’m unable to go back to Honduras.“

One of those who is fortunate enough to have a place to stay is 16-year-old Honduran Carlos. In March, Carlos had spent slightly more than a week in Tapachula before heading north with his 23-year-old cousin to join Carlos’ parents and sisters in Puebla, Mexico.

His parents and sisters likewise travelled through Hospitalidad y Solidaridad on their approach to obtaining permanent residence and papers after leaving home eight to nine months prior. Carlos discussed his reasons for being here while sitting at a picnic table outside the shelter.

Threats from gangs, he said “My dad evidently had issues with them, but the main cause was a miscommunication. … And I was forced to travel here in order to look for my father.”

Carlos’ father must travel from Puebla to Tapachula, according to the shelter’s directors, to go through a formal family reunification process with immigration officials.

The majority of migrants who are stranded here are from Haiti. While some recently left their Caribbean country, many had spent the previous ten years working in countries like Brazil, Colombia, Chile, and Venezuela. According to COMAR’s 2019 report, less than 10% of asylum seekers were Haitians. By 2021, 51,000 Haitians had applied for asylum in Mexico, accounting for approximately 40% of all such petitioners.

All migrants, but especially those from Haiti, claim that it has been exceedingly difficult to wait at Tapachula for weeks or even months in order to obtain permission to proceed to the United States or Canada or to stay and work in Mexico.

According to Freddy, a 42-year-old Haitian immigrant who arrived in August 2021, “They sell us everything more expensive.” Even the flat and the home. You’re a migrant, thus the rent is significantly more expensive.”

One of two Creole interpreters employed in Tapachula to assist others with the immigration procedure from Mexico is Freddy.

“Most of them, you know, have been here for eight to twelve months, so if you don’t have documentation, you can’t go to school, you can’t receive decent medical care, you have nothing,” he said. “You are not a person,” they tell you here.

A safe place to sleep or even getting their next meal are daily struggles for parents with small children, according to Freddy. Additionally, until their paperwork is in order, they cannot enrol in school.

Only 5 percent of immigrant children attend school, according to Freddy.

In the previous year, Haiti has experienced more than its fair share of natural and political catastrophes, including the death of Prime Minister Jovenel Mose and a significant earthquake that was swiftly followed by tropical storm Grace. A 2010 earthquake that caused more than 1.5 million people to lose their homes sparked a previous wave of Haitian immigration to South America.

Extreme xenophobia and bigotry are present among residents in southern Mexico toward migrants from Haiti. Numerous Black immigrants claim they experience prejudice when trying to get employment, housing, and immigration services. Additionally, they claim that Mexican officials guide immigrants from Spanish-speaking nations through the convoluted immigration process.

Government representatives in Tapachula defended how the country handles Black immigration. They claimed that the system is just overburdened and lacking in resources, such as interpreters who speak Creole.

The Mexican government decried racism and xenophobia directed at migrants at a COMAR-sponsored symposium on the maltreatment of migrants last November.

The panel stated in a news release that “those in transit have historically suffered prejudices and stigmas that have caused the normalisation of incorrect beliefs that are an attempt to explain them getting uneven treatment and unfairness.”Because of the xenophobic language and attitudes, they encounter in our country, “their precarious status intensifies.”

According to the news announcement, COMAR in particular is dedicated to dispelling misconceptions, prejudices, and stigmas towards migrants through education and training.

There is “no difference in therapy,” COMAR administrator Cinthia Perez Trejo wrote in an email to Cronkite News in the middle of July. “Procedures within the office of the Secretary of Governance of Mexico for penalising any public person who performs such activities” were noted by Perez.

Depending on their vulnerability, some migrants receive legal assistance and other resources from the U.N. High Commissioner for Refugees (UNHCR). In order to relieve some of the burden, the office has stated it will increase the number of Creole interpreters, arrange and facilitate appointments with COMAR, and develop a labour integration programme.