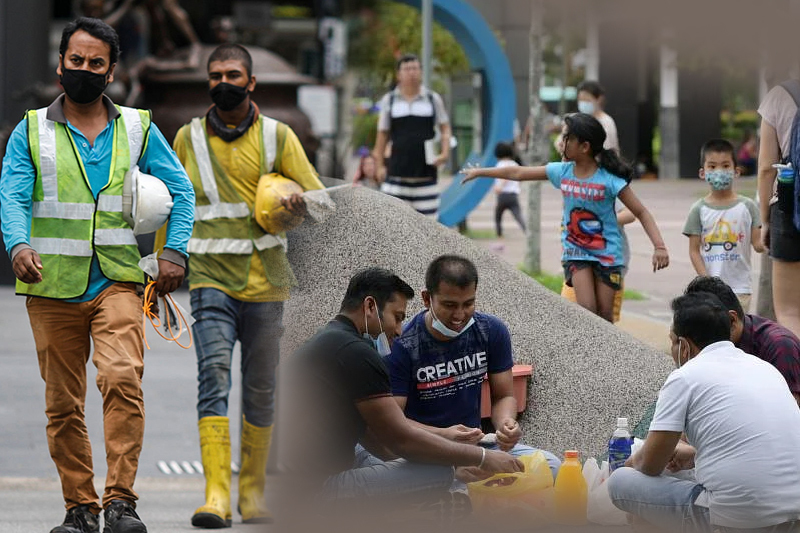 Singapore – Migrant workers flocked to well-known spots in droves as restrictions limiting their movement were largely eased on Sunday. They claimed that the day out with friends had improved their mental health.

Many people nonetheless chose to register for a Popular Places Pass to attend some of their favourite spots even though they were free to visit community areas as of last Friday. The pass is only valid for dorm residents. On Sundays and public holidays, it is intended to reduce foot traffic in Little India, Jurong East, Chinatown, and Geylang Serai.

Mr. Min Manak, 46, a resident of Bangladesh, was waiting for his buddies from other dormitories to arrive at a bus stop on Haig Road in Geylang. He was the first to arrive after taking an East-West Line train from his South Tuas dorm.

“Me and my friends are going to stroll along Geylang Serai. Three years have passed since I last visited,” he added.

We’ll go have quick food afterwards, perhaps at KFC or McDonald’s. We are tired of eating rice every day, therefore we want something different. After that, I’ll go back to my dormitory. The previous time, we had a choice of going to work or staying in the dorm. Now we may stroll around and unwind. Our bodies and minds would benefit from it, he added.

On Sunday, he intends to travel to Little India to attend Angullia Mosque.

He used to do it frequently during his 15 years here, but he was unable to do so due to Covid-19 limitations that were imposed on both migrant workers and the general public.

Mr. Shyam Chandran, 29, was at Jurong East taking shots with his camera.

Mr. Shyam, a Bangladeshi photographer, used a zoom lens to capture images of his companion as he was sitting outside Westgate Mall. “The last time, all I experienced in my life was the dorm, construction, dorm, construction, and dorm. I was incredibly down. I was unable to go outside or visit my pal,” he said.

For these workers, the removal of restrictions meant they could resume their regular activities as well as reestablish their connection to their homes. Groups of office workers may be seen walking through Little India, catching up with friends and window shopping.

Ashok Kumar, a construction worker, had not ventured outside his dorm for entertainment in three months. The 37-year-old Indian native claimed that being able to move around Singapore without restriction “feels better,” and that Sunday’s outing gave him a chance to catch up with his pals and “swap stories.”

Little India was the next-best option for a taste of home because some dorms don’t have kitchens.

Workers were primarily in Chinatown to perform errands.

Chinese grocery stores nearby were humming with activity as employees bought regional snacks and meals to bring back to their dorms. Workers lined up at remittance businesses in the People’s Park Complex to send their hard-earned money home.

A factory worker who only went by Mr. Ren claimed that he rarely went to Chinatown since it was too far from his dormitory in Taman Jurong. He just travels to send money home, and that is the only reason for each visit. He hasn’t visited his house since 2017.

The Popular Places Pass was unknown to the 50-year-old, but Mr. Ren claimed he believed it was unneeded.

“I haven’t recently requested a pass to leave the house. I believed that the police would accept our work licenses as sufficient identification. What’s the point if we don’t know about the pass? They are now pretty bothersome to me,” he said.

Prior to now, the Ministry of Manpower had declared that it will carry out arbitrary inspections at the four sites and engage with migrant workers to clarify the process for requesting a Popular Places Pass.