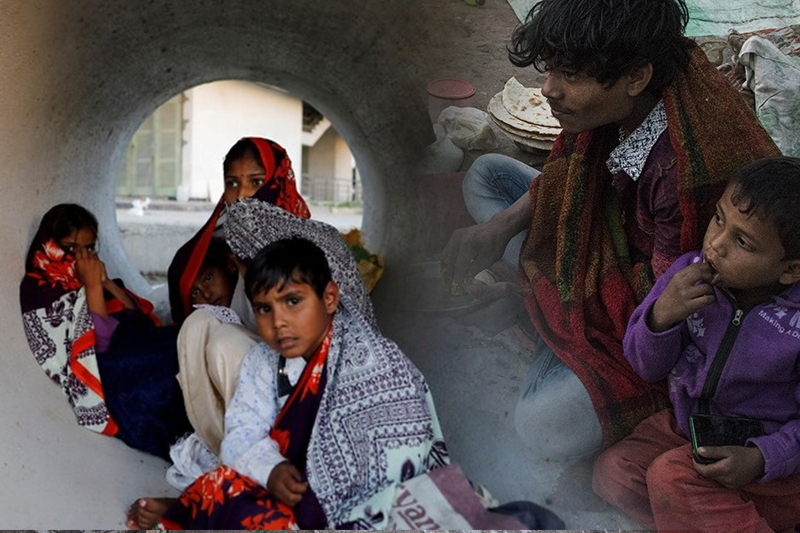 India – Five other migrant workers, all from Bihar, dwell in the same cramped room as Ratan Kumar, a worker from Jamalpur in the Khagaria area of Bihar. He works on a building site in the Sarjapur neighborhood, and the room is there, though it is poorly ventilated and has no other facilities.

Ratan and his friends manage by candlelight at night because the buildings under construction lack electricity, and they worry about snakes and rodents because of all the rubbish and debris lying about the construction site.

Ratan, 26, says he has to support his wife and four young children back home with 5000 rupees each month from his meager earnings of about Rs 9000. “I cannot afford a leased room.” He works nine hours a day, starting at 9 a.m. and ending at 5 p.m. on an average of 22 days per month. He must transmit money through brokers because he does not have a bank account, which results in additional broker fees.

When Ratan first moved to Bengaluru five years ago, he immediately found work as a tile layer. But for him and his coworkers, life has been difficult. Around the same time, his roommate, Bittu Kumar, 21, moved from Khagaria. Despite being alone, he is responsible for providing for his four siblings and aging parents. Bittu, who works as a mason and tile layer, claims he is also unable to afford leased accommodation in Bengaluru.

Mohit, 18, lives with them and experiences the same compulsions. But he also has another issue. “I have a skin condition” “that I acquired from living on a construction site,” claims Mohit. “This necessitates spending money on doctors and medications.”

Raja Ram, 55, of Bagha village in Betia, Bihar, works on installing paving in the complex at another building site next to Agara. On the other hand, Raja, on the other hand, has been in Bengaluru for the past 20 years and currently resides there with his five-person family in a rented pakka house with two bedrooms, one bathroom, and a proper kitchen. Raja Ram has lived and worked at various construction sites throughout the city and is able to obtain jobs on a regular basis, bringing in between Rs 20,000 and Rs 25,000 each month.

Raja Ram, who has lived in the area for a long time, is different from recent immigrants like Ratan Kumar in that he has a local address proof and a state BPL ration card, which enables him to get discounted gas as well as water and electricity connections. He has a bank account and has saved money throughout the years.

So much so that his son, Shivam Kumar, is enrolled at a government engineering college in Bangalore to study mechanical engineering. His daughter is studying for the medical entrance exam while his son is pursuing his BA in commerce.

Most migrant workers are semi-skilled laborers from the eastern states, and they travel to Bengaluru in search of jobs that will pay them more than they could ever hope to make at home. However, because so few of them have a formal education, employers can take advantage of them in terms of pay and working conditions.

The majority lodge in small tin shelters on building sites or in deserted regions nearby in groups of four to five. Some people erect plastic tents on the sides of roads or beneath bridges. Most of them lack access to necessities like clean water, toilets, and basic hygiene. They run the risk of theft and muggings because of their open lifestyle.

Ratan Kumar and similar workers typically make between Rs 400 and Rs 450 per day, with an average monthly food expenditure of Rs 2000. However, they must also spend money on medications because their unclean living circumstances frequently result in infections and other health problems. According to Ratan, he spends between Rs 500 and Rs 800 per month on his medications. He cannot use a ration card because his family uses one in Bihar, where he currently resides.

Because their relatives back home require ration cards, other workers also face this difficulty. Dilawar Hussain, 30, a native of Murshidabad in West Bengal, says, “I buy from shops to cook meals as the ration card is being utilized by my family back home.” Hussain lives in a slum where the majority of the population is made up of immigrants from neighboring states.