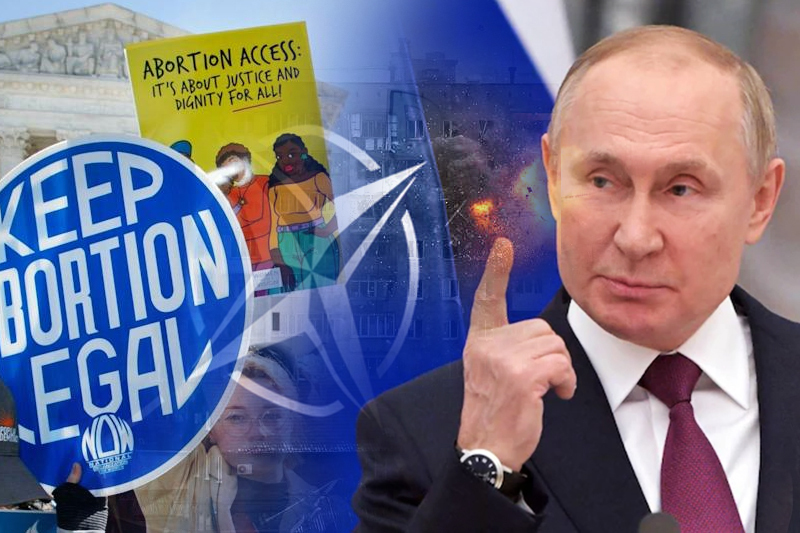 Two sides of the same process are the expansion of the US-NATO war against Russia and the tremendous assault on democratic rights, symbolized by the US Supreme Court ruling that outlawed the right to an abortion.

Vladimir Lenin described imperialism as ‘reaction all down the line’ in his key 1916 book Imperialism and the Split in Socialism. Finance capital ‘strives for dominion, not freedom’ in both military and domestic affairs. The democratic-republican and reactionary-monarchist imperialist bourgeoisie’s differences are destroyed exactly because they are both rotting alive, according to Lenin.

The leaders of the seven largest imperialist nations gathered this weekend at the G7 meeting in the Bavarian Alps to discuss how to proceed with the war. The battle has turned into a de facto war against Russia in Ukraine behind the backs of the populace, without a public debate or official declaration.

A Saturday New York Times piece headed “Commando network organizes flow of weapons in Ukraine, officials say” disclosed the full scope of NATO’s role. In order to “rush to give weapons, intelligence, and training,” the paper claims that the US and NATO have established “a stealthy network of commandos and spies.”

According to US and European sources quoted in the story, NATO nations have sent advisers into Ukraine to train Ukrainian soldiers, while the US military trains soldiers directly at facilities in Germany.

This is the result of a long-term strategy to use Ukraine as a staging area for a conflict with Russia, a strategy that dates back to the Maidan uprising and the 2014 Ukrainian elections. More than 27,000 Ukrainian soldiers were taught by American Special Forces and National Guard instructors at the Yavoriv Combat Training Center in western Ukraine, close to the city of Lviv, from 2015 until early this year, according to Pentagon officials.

The leaders of the world’s so-called “democracies” imitated Hitler, the last capitalist politician to attempt the colonization of Russia through military force, in both their choice of planning location and their war goals. The G7 leaders met in the Bavarian village of Schloss Elmau, which was once a Nazi summer camp during World War Two.

The G7 group declared in a communiqué following their summit in Schloss Elmau that it was ready to continue the struggle “for as long as it takes.” This implies that the number of lives that governments are willing to give up in order to achieve their geostrategic objectives has no upper bound.

The G7 summit’s first item on the agenda, which addresses the expense of living and food shortages, makes it evident that the ruling class is conscious that the war is laying the groundwork for a massive clash with the working class.

In these circumstances, each imperialist power’s ruling class sees even the most fundamental democratic liberties as impediments to achieving its military objectives. The logic of the progression of the war in the capitalist countries requires “reaction all down the line,” even while proponents of war in the corporate media defend war on the grounds that Putin is a “fascist.“

The decision by five unelected Supreme Court justices to deny hundreds of millions of Americans access to abortion care must be understood in this light.

The court declared that it was attacking all fundamental democratic rights when it made its ruling. Supreme Court Justice Clarence Thomas made it apparent that all cases involving substantive due process must now be reviewed, even though he specifically mentioned contraception and same-sex marriage as its next targets. This covers fundamental freedoms against arbitrary searches and seizures, the right to peaceful assembly and speech, laws governing the workplace, and other civil rights.