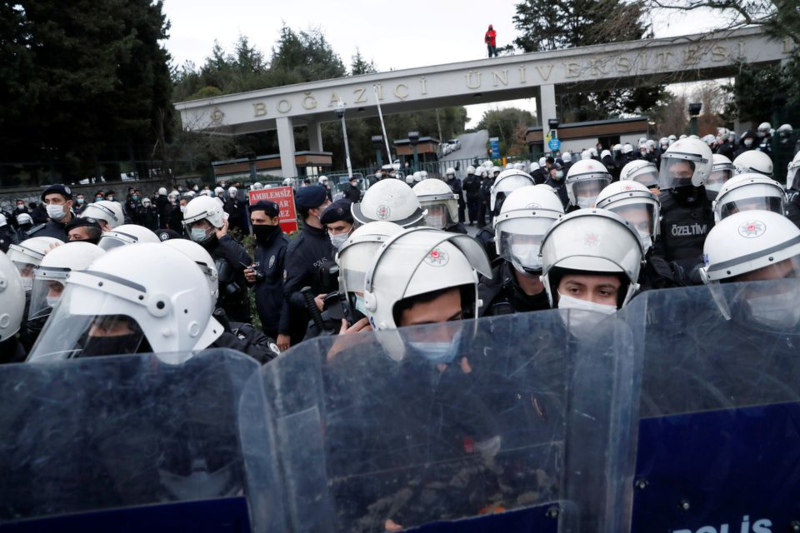 A group of leading Democratic senators has re-introduced the Turkey Human Rights Promotion Act of 2021 with the aim of imposing US sanctions on the Turkish government over the country’s worsening human rights record.

The development has come days after US President Joe Biden recognised the 1915 Ottoman-era killings of Armenians as “genocide”.

Senators Edward Markey (D-Massachusetts, Jeff Merkley (D-Oregon), and Ron Wyden (D-Oregon) re-introduced the human rights bill in the Senate, urging President Biden to impose sanctions on Turkish President Erdogan for human rights violations in the country. In the 19-page-bill, US Senators have called out Ankara for forced detention of thousands of people and crackdown on political and media freedoms.

According to a statement on Senator Ed Markey’s official website, the legislation condemns the human rights abuses carried out by the Erdogan government, which intensified after a coup attempt in 2016.

“The Government of Turkey, under President Recep Tayyip Erdogan, has engaged in a brazen campaign to silence journalists, political opponents, dissidents, civil society activists, and minorities throughout Turkish society, as well as targeting Turkish citizens outside of its borders,” the statement read.

In the statement, Markey stressed the free pass given to Turkish President Erdogan from the erstwhile Trump administration to commit abuses has officially expired. Senators called on the US government to use its leverage with Turkey as a NATO ally to prevent further “erosion of hard-fought democratic progress in the country.”

The legislation also directed the US Secretary of State to provide aid and assistance to civil society groups in Turkey working for safeguarding the release and rights of “prisoners of conscience and political prisoners” in the country.

In addition, senators further called on the Erdogan government to end the crackdown on free expression on the internet, take steps to improve the dire climate for journalists and halt indiscriminate detention and prosecution of lawyers, judges, and prosecutors.

If Ankara does not take the necessary steps to address its human rights abuses, the US President should impose sanctions in accordance with the Global Magnitsky Human Rights Accountability Act and the Khashoggi Ban, the statement added.

In March 2021, the Biden administration released a report holding Turkey responsible for various human rights abuses in the country, including torture and detention of thousands of political foes and arbitrary killings.

Over the past few years, Turkey has been witnessing intensifying human rights crisis. It continues to harass and detain minorities, journalists, lawyers, and other segments of society, over alleged accusations of insulting the state. Since the 2016 coup attempt, Turkish authorities have arrested thousands of people over suspicion.