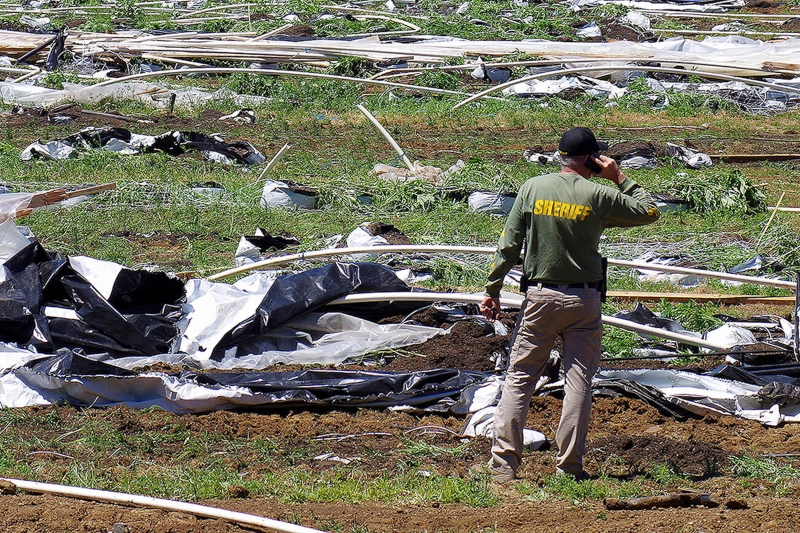 Southern Oregon – is home to illegal marijuana farms that are allegedly run by foreign drug cartels. The thousands of illegal migrant workers at these farms are facing violence by the gangster bosses, and have to face threats, being cheated while living in shabby conditions, authorities say. The state border line with California is witnessing extreme surge in violence rate with water theft increasing in the drought struck region. As a result many counties including Jackson and Douglas were forced to declare emergency last month. In order to reinforce cannabis law in the region, the counties had requested for state funding and deployment of National Guard.

Neighbouring Josephine County is said to be preparing its own ‘emergency declaration’. A draft document of the declaration cites “rampant violations of county codes, state water laws and criminal laws.” The county mentioned in a previously written letter to Oregon’s senate president that it is experiencing “a tragic surge in narco-slavery.”

Majority of illegal marijuana farms in the region operate under pretext of growing legal hemp. The crops they grow, however, have high amount of THC, the component that makes the pot ‘high’. This level is far above the legally permitted amount for hemp. This is overwhelming for authorities as they lack the officials to keep a check on legality of these farms. Many farms that are guarded have refused entry to state inspectors. These farms also exploit scores of illegal migrant workers employed with them. Many employers have refused to pay the workers their due and are threatened to violence if they try to quit or report to authorities. “We’ve had several cases in Josephine County, where they were threatened with guns to their heads, ‘If you guys tell anybody, we’re going to harm your family in Mexico,’ or ‘We’re going to shoot you,’” said Kathy Keesee-Morales, co-director of Unete, an immigrant and farmworker advocacy group in Medford, Oregon. Living in poor conditions, these workers are forced to use holes in the ground to use for toilets, take bath in makeshift bathrooms, cook in unsanitary kitchens and live in tents or cots in shipping containers. Jackson County Sheriff Nathan Sickler said that his officers do not arrest migrant workers on immigration violations but hand out cards by Unete. These cards are in Spanish that guide the migrants of free services provided by many listed agencies. These workers are scared to talk to law enforcement authorities as they are worried they might be charged of working in illegal farms. “There is a fear factor,” the sheriff said. “These individuals know that they could be at risk for talking to the police about several things, including the conditions, the lack of being paid.”

The region is at tipping point as migrant workers face extreme violations while being used for illegal farming.