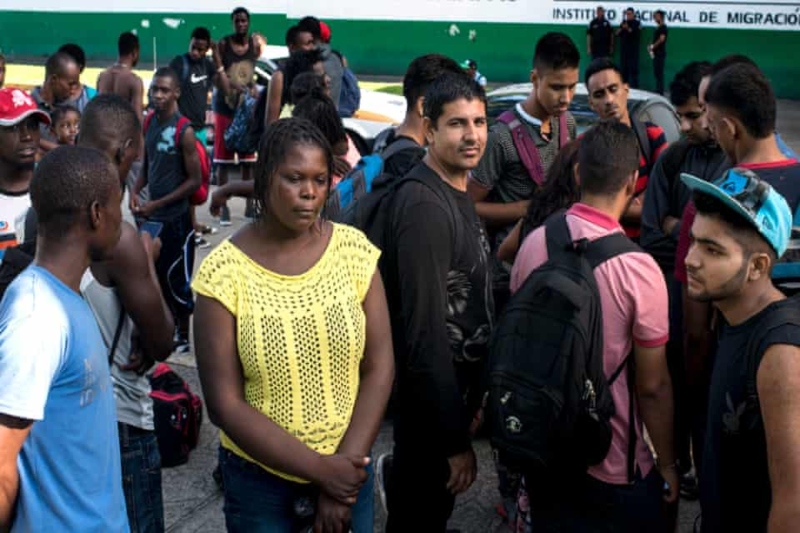 how migrants continue to risk life for passage into the us

Mexico – Caravan of around 2000 migrants has set foot across to the US border, an American new agency confirmed that could see people moving on foot through drone images captured.

Many on foot have crossed railway lines and are single males that are on the run and would not want to be caught by border police either. The migrant population on the move comprised Albanians, Romanians, Sri Lankans- literally people from all over the world, carrying their few belongings and children with them.

Family units comprising nationalities from West Africa and China were also seen walking on foot to the border. Many families might land up being caught but they would let it happen because that would mean they land up on the other side of the fence- into the US.

Last week, border patrol caught a Mexico national illegally smuggling some 79 migrants on a raft boat through international waters. Illegal immigrants have been smuggled into tool boxes and travelled in convertible cars on roads connecting to the US border.

Media reports are showing that Border patrol is overwhelmed and understaffed at moment to handle a surge of these cases which are common and happen literally in the wee morning hours or late into the night.

When Border patrol is busying handling cases where families are concerned, single runners who might have criminal cases pending on them, try and find weak spots in the border areas and escape the preoccupied Border patrol officers.

Most of these instances are happening near Texas border. Recently, Border Patrol agents also arrested 24 illegal immigrants suspected of being part of a human smuggling operation that used local railways to travel across south Texas, US Customs and Border Protection (CBP) confirmed. The group was carrying a bag with bolt cutters inside, which authorities believed were being used to break into train cars. Meanwhile, the Department of Homeland Security has announced that it would stop roundups of illegal immigrants at their place of work and encourage “prosecutorial discretion” for those who are “victims of, or witnesses to, workplace exploitation.”