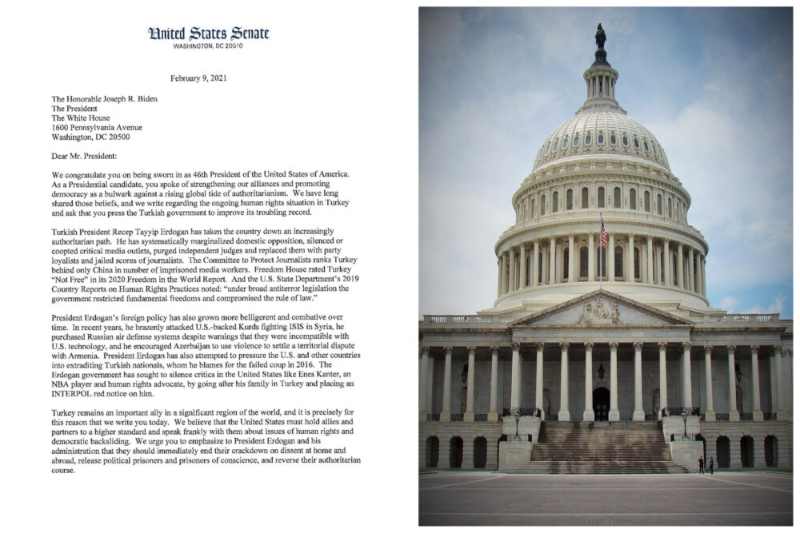 On Tuesday a bipartisan majority of 54 United States Senators out of 100 signed a letter to Joe Biden, the 46th President of USA, over the ongoing human rights crisis in Turkey.

The bipartisan majority signed letter has urged the Biden administration to push Turkey to do more about human rights in the country. The letter accused Turkey President Recep Tayyip Erdogan of opting a rather ‘authoritative’ regime. Turkish president Erdogan is accused of marginalizing in-state opposition, silencing the media outlets that are opposing and raising voice against the regime, jailing journalists, purging independent judges, and replacing them with party loyalists.

The letter further highlights how Erdogan has swiftly swayed his foreign policy and transformed into a more combative one. Turkey under directions of Erdogan attacked US-backed Kurds who were combating ISIS in Syria in recent years. Furthermore, despite opposition from the US about non-compatibility with its technology, Turkey went ahead and purchased Russian air force defense systems. The most catastrophic unfolding that was enabled by Turkey was of encouraging Azerbaijan of taking a path of violence to settle a decades-old regional dispute with Armenia. Erdogan has also forced the US and other nations of extraditing Turkish nationals that he blames for the 2016 coup that had failed.

Turkey has been ranked just after China by the Committee to Protect Journalists in a number of journalists jailed to silence them of dissent. In the 2020 Freedom in World Report, the Freedom House has rated Turkey “Not Free”.

The Senators further underlined in the letter that though Turkey is an important regional ally to the US, it must still be held accountable for its actions and holding them to high standards of human rights.

Biden administration must urge Erdogan government to end the dissent crackdown in the country, release all political prisoners and leave the path of authoritative regime.

Senators concluded the letter as “America has a bipartisan tradition of promoting basic human rights and democratic principles. We believe deeply in continuing this important tradition and stand ready to assist your administration on these important issues.”

Last year after the purchase of the Russian air defense system, the Trump administration had slapped sanctions on the NATO ally. Erdogan has recently said that Ankara wants to improve the relations with Washington under the Biden presidency. President Biden is, however, expected to take a tough stand against Turkey over continuous human rights abuses. Since the failed coup in 2016, Turkey under Erdogan’s presidency has detained over 300,000 people and suspended more than 150,000 civil servants. Independent media has been shut down and any voice of dissent is met with a severe crackdown and suppression.