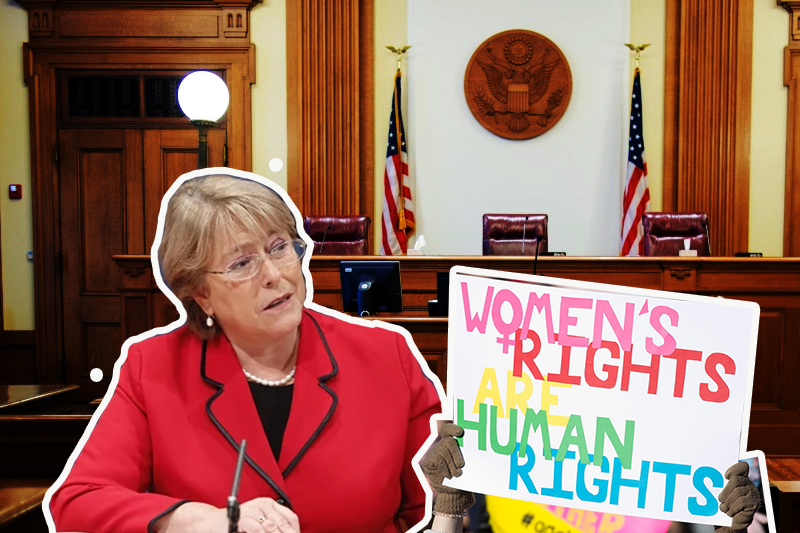 United States – Michelle Bachelet stated in a statement that the highly anticipated Supreme Court judgment, which was rendered by a vote of six to three in the specific case of Dobbs v. Jackson Women’s Health, represented a “significant setback” for sexual and reproductive health in the US.

The landmark ruling transfers responsibility for determining abortion availability and legality to the individual states.

The World Health Organization (WHO) and the UN agency for sexual and reproductive health (UNFPA) responded to the US decision earlier without specifically mentioning it, noting that a startling 45 percent of abortions worldwide are unsafe, making the practice a leading cause of maternal death.

According to the agencies, when national or regional government limitations grow, more women will inevitably pass away.

“Abortion occurs far too frequently, whether it is permitted or not. According to data, restricting access to abortion only makes it more dangerous, UNFPA noted, rather than preventing individuals from seeking one.”

Nearly 50% of all pregnancies globally are unplanned, and more than 60% of them may result in abortion, according to the agencies’ 2022 State of World Population report. If access is further restricted, UNFPA expressed concern that there may be an increase in unsafe abortions worldwide.

The organization noted that “decisions undoing gains achieved have a wider impact on the rights and options of women and adolescents everywhere.”

Reiterating the point that reducing obstacles to abortion “protects women’s lives, health, and human rights,” WHO reaffirmed the statement on their official Twitter account.

An attack on women’s autonomy

Ms. Bachelet also emphasized that access to safe, legal, and effective abortion is fundamental to women’s and girls’ autonomy and ability to make their own decisions about their bodies and lives, free from discrimination, violence, and coercion. This right is firmly rooted in international human rights law.

To the detriment of their fundamental rights, she cautioned, “this ruling robs such autonomy from millions of women in the US, particularly those with low means and those belonging to racial and ethnic minorities.”

The rights chief emphasized that more than 50 nations with formerly stringent rules had liberalized their abortion regulations over the previous 25 years before the decision was made.

She stated, “Unfortunately, with today’s decision, the US is turning away from this progressive trend”.

UN Women, a UN agency, issued a warning in a different statement that women’s control over their bodies is also correlated with the responsibilities they can play in society, whether as members of the family, the workforce, or the government.

179 nations, including the United States, signed the 1994 International Conference on Population and Development (ICPD) Programme of Action, which acknowledged the dangers of unsafe abortions and urged all nations to offer post-abortion care to save lives, regardless of the legality of abortion.

The declaration, which was the outcome of a high-level meeting in Cairo, Egypt, also made a point of emphasizing that everyone should have access to reliable information regarding their reproductive health and contraceptives.

As the guardian of the Programme of Action, UNFPA promotes every couple’s and person’s right to make an informed decision about how many, how far apart, and when to have children, and to have the resources necessary to do so.

The organization also issued a warning that Sustainable Development Goal 3, which is focused on maternal health and has the support of all UN Member States, may not be achieved if unsafe abortions continue.