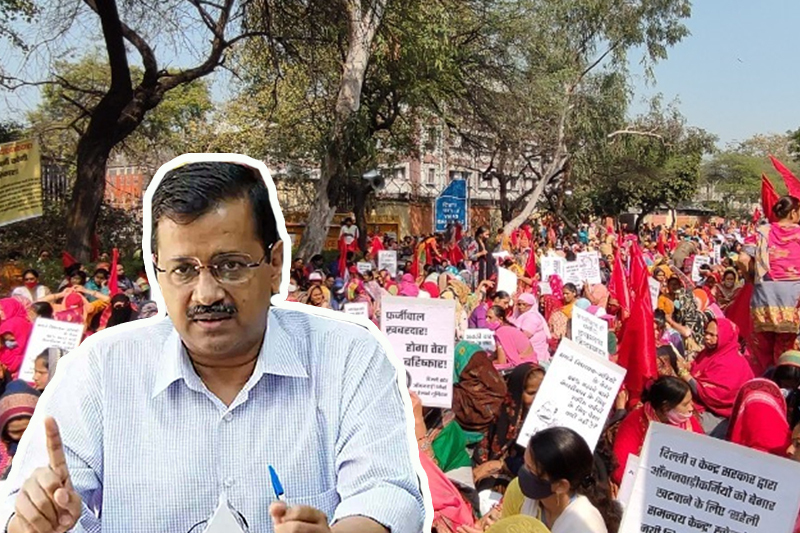 India – Anganwadi workers, 884 of them, have been met with a challenging decision that would adversely impact their lives. They have been terminated by Delhi government after they staged one month long strike demanding decent working hours and rise in stipend. These female workers, most of them single mothers, were terminated from job through notice on March 14 after they went on strike for 39 days.

The Anganwadi workers have said that even after serving the public relentlessly and selflessly during pandemic, their salaries have not been issued since January. Many shared their plight of managing their household through borrowed money.

Single mother Anita is one such worker who has been sacked from the job. She is now worried of managing the studies of her children and household expenses with no support income.

“I’ve been borrowing money from relatives, working as a part-time house help and somehow managing their school and tuition fees. When I joined anganwadi in 2007, my salary was Rs 750. I’ve worked extensively during the COVID lockdown, provided door-to-door ration, conducted vaccine campaigns but our salaries have been on hold since January, 2022. We did not even receive masks, sanitisers or any incentive in that regard from our department,” Anita said, adding, “We tried complaining but our supervisor threatened us saying we would be terminated.”

Another single mother Savita said, “I’m a single mother and the sole earner of the family. I have a daughter who is doing her graduation. She has been trying to help me by giving tuition classes. I lived in a rented house but had to shift to a cheaper place after my termination. I have been borrowing money from my brother to run the household.”

Furthermore, many workers are being scammed over the situation. Many have received messages of having salaried credited to their accounts, but same doesn’t reflect in their bank accounts. “The anganwadi workers are being scammed with text messages, whereas, our bank accounts are empty. A delegation of five terminated workers tried visiting the women and child department but the secretary refused to meet us. How are we supposed to register our complaints? Many of us even visited the bank branches to confirm about the same, but even the bank managers said that no money got credited into our accounts,” another anganwadi worker, Poonam said.

On July 16, a delegation of Anganwadi workers met Delhi’s Lieutenant Governor V.K. Saxena and submitted a memorandum to him.

But after no action was taken, on Thursday the Delhi State Anganwadi Workers and Helpers Union (DSAWHU) gathered outside office of the city government’s Women and Child Development Department at Kashmere Gate. They raised slogans against the AAP-led Delhi government calling for reinstatement of the terminated workers.