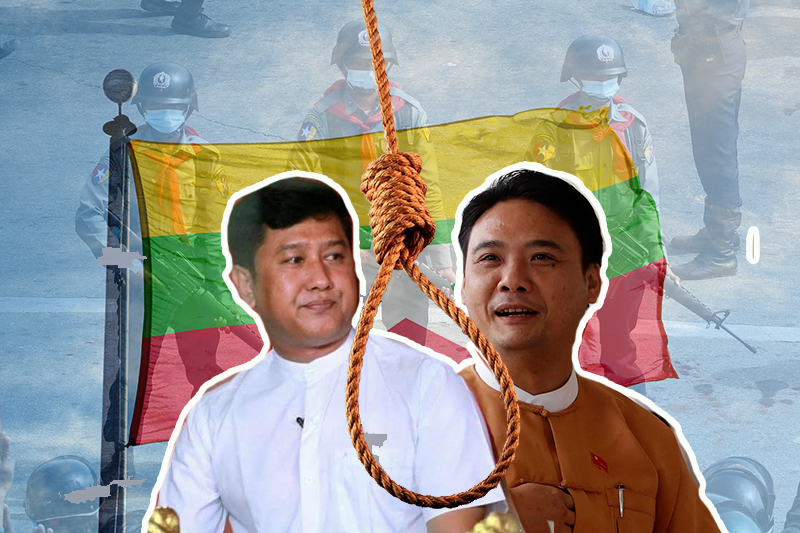 Myanmar – Four prisoners of democracy movement in Myanmar, including former lawmaker in party of Aung Saan Su Kyi, have been executed by the junta in country’s first such use of capital punishment in decades.

On Monday, the junta-controlled Global New Light of Myanmar said, “The men had been accused of conspiring to commit terror acts.” Local media had reported that the families of the executed men had travelled to Yangon’s Insein Prison, demanding to see the bodies.

The four men, including former legislator Phyo Zeya Thaw and prominent pro-democracy activist Kyaw Min Yu, popularly known as Jimmy, had been executed in January in closed trials. The executions were carried for charges involving explosives, bombings and financing terrorism under the Anti-Terrorism Law. Two other men, Hla Myo Aung and Aung Thura Zaw, were convicted of the alleged murder of a woman believed to be an informer for the military in Hlaing Tharyar in Yangon.

Amnesty International’s Regional Director Erwin van der Borght said regarding the executions carried out by country’s military junta for first time since 1980s. “These executions amount to arbitrary deprivation of lives and are another example of Myanmar’s atrocious human rights record. The four men were convicted by a military court in highly secretive and deeply unfair trials. The international community must act immediately as more than 100 people are believed to be on death row after being convicted in similar proceedings.”

“For more than a year now, Myanmar’s military authorities have engaged in extrajudicial killings, torture and a whole gamut of human rights violations. The military will only continue to trample on people’s lives if they are not held accountable.”

“At a time when more and more countries take steps to abolish the death penalty, the resumption of executions after more than three decades not only puts it at odds with the global trend, but is also contrary to the goal of abolition enshrined under international human rights law and standards. Myanmar’s isolation could not be any more glaring. We urge the authorities to immediately establish a moratorium on executions as a first critical step.” UN Special Rapporteur Thomas Andrews said, “My heart goes out to their families, friends and loved ones and indeed all the people in Myanmar who are victims of the junta’s escalating atrocities.”