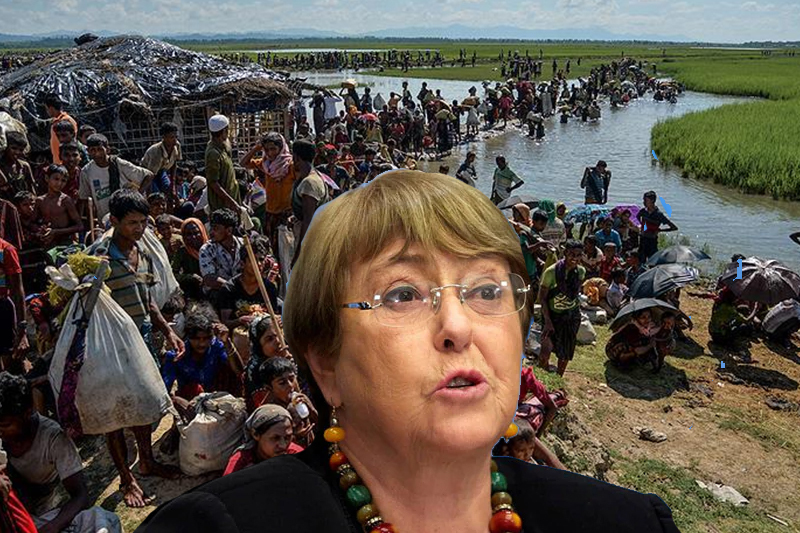 UN’s Bachelet visited Bangladesh and the Rohingya refugee settlements in Cox’s Bazar District on Tuesday to talk to people about their views on genocide. She also talked to genocide survivors. The recent murders in camps in the country have reportedly left Rohingya refugees fearful for their safety.

Maulana Azim Ullah, a Rohingya religious leader, reportedly said, “We asked the UN’s chief to create a peaceful environment in Myanmar so that we can go back to our homeland with citizenship rights and safety.” Subsequently, she assured them of the UN’s positive role in the sustainable repatriation of the Rohingya.

Rohingya youth leader, Khin Maung, reportedly said that they are not satisfied with the slow movement of the United Nations in resolving the Rohingya crisis. He further said that he cannot believe that such a powerful platform of world leaders needs so much time to create a safe environment in Myanmar for the sustainable repatriation of the stateless Rohingya refugees.

He also pointed out the recent murders of two Rohingya leaders in the camps and demanded quick action against the accused. He also asked the UN to strengthen the safety measures in the camps. Earlier, camp residents blamed the two killings on the Arakan Rohingya Salvation Army.

According to media reports, most refugees of the camps in Bangladesh fled Myanmar in 2017 after an army offensive against the Muslim minority. Over a million Rohingya were forced to flee to other countries due to genocide. The U.N.’s highest court last month accused Myanmar of genocide.

Currently, there are more than 1.2 million Rohingya refugees in Bangladesh.