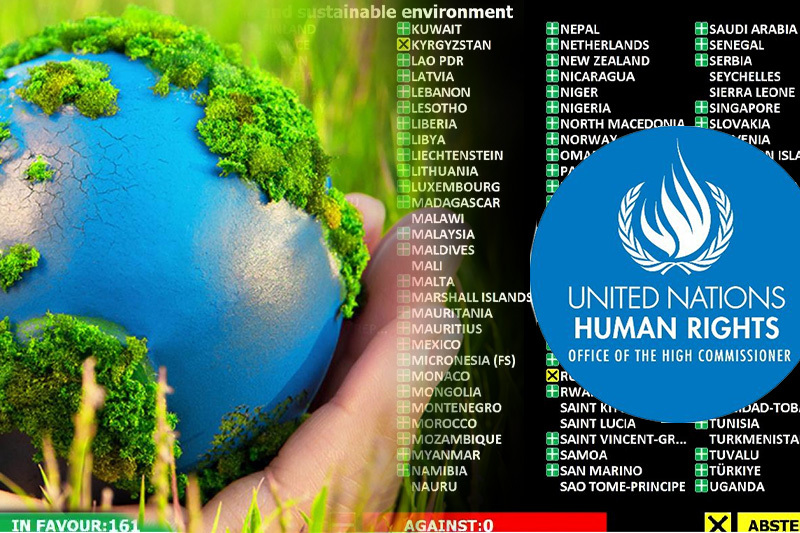 UN – On Thursday, the United Nations General Assembly passed a historic resolution. With 161 votes in favor of the resolution and eights abstentions, Access to Clean, Healthy and Sustainable Environment has been declared as the new universal human right. Based on a text adopted by UN Human Rights Council last year, the resolution “calls upon States, international organisations, and business enterprises to scale up efforts to ensure a healthy environment for all”.

“The resolution will help reduce environmental injustices, close protection gaps and empower people, especially those that are in vulnerable situations, including environmental human rights defenders, children, youth, women and indigenous peoples”, he said in a statement released by his Spokesperson’s Office.

UN High Commissioner for Human Rights Michelle Bachelet has also lauded the General Assembly’s decision and echoed the Secretary-General’s “call for urgent action to implement it”.

“Today is a historic moment, but simply affirming our right to a healthy environment is not enough. The General Assembly resolution is very clear: States must implement their international commitments and scale up their efforts to realize it. We will all suffer much worse effects from environmental crises, if we do not work together to collectively avert them now,” she said.

The text regarding this new resolution was first presented last year in June by Morocco, Maldives, Costa Rica, Switzerland and Slovenia. It notes that right to a clean and healthy environment is related to the international law and requires implementation of variety of agreements related to climate and environment. Furthermore, it highlights that climate change impact, unsustainable management of natural resources, pollution and resulting loss of biodiversity interferes with the enjoyment of this universal human right.

“Governments have made promises to clean up the environment and address the climate emergency for decades but having a right to a healthy environment changes people’s perspective from ‘begging’ to demanding governments to act”, said UN Special Rapporteur on Human Rights and the Environment, Mr. David Boyd.