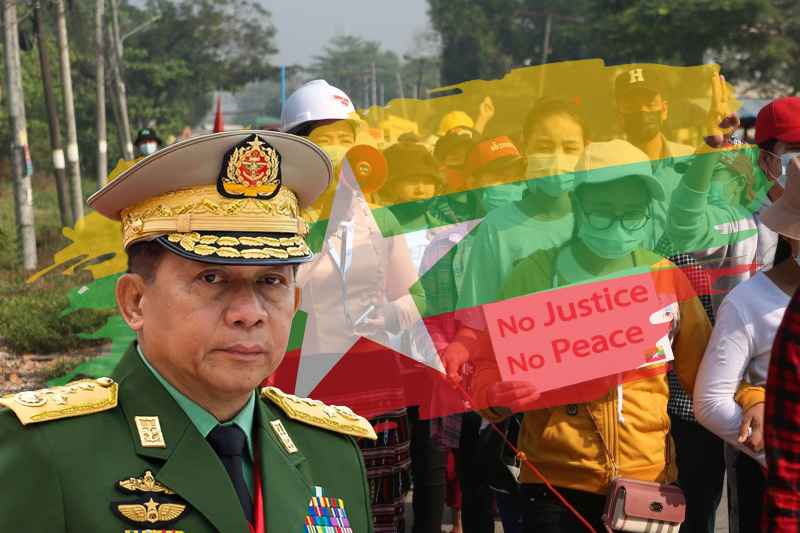 Myanmar – Since the military takeover in Myanmar last year, labour organisations have claimed that the military government has routinely infringed workers’ rights, particularly the freedom of association for unions.

The freedom of association for union workers has ended since the military coup, according to Daw Moe Sandar Myint, president of the Federation of General Workers Myanmar (FGWM), who is currently conducting business from a region of the nation outside of the junta’s jurisdiction.

She claimed that legitimate labour unions, whether local or national, were no longer able to organise.

Because factory owners are collaborating with the Ministry of Labour, which is under the control of the regime, and have threatened union officials and workers to prevent them from taking part in union activities or claiming their rights, trade unions in factories are unable to perform basic union functions like protecting workers’ rights.

According to Daw Moe Sandar Myint, “on certain cases they [factory owners and regime officials] even offered the personal details of union leaders to the security authorities so they could be questioned or detained.”

The government has designated 16 unregistered trade unions and civil society groups (CSOs) to be operating as “illegal labour organisations,” and the ILO highlighted this in a brief report on Myanmar that was published in late August.

In retaliation for their participation in strikes and nonviolent protests calling for the restoration of democracy and civilian rule, regime forces have raided union offices, harassed and threatened union members and their families, and detained and put trade union leaders on a wanted list, according to the ILO.

The same treatment is being meted out to CSOs and trade unions who are not formally mentioned on the junta’s blacklist. The issuance of arrest warrants for CSO and unregistered union officials on incitement charges in accordance with section 505(a) of the Penal Code has been a crucial instrument in the fight against unions.

The ILO study was swiftly refuted by the junta’s Ministry of Labour on September 2, which stated that it “seriously disagrees to the ILO’s incorrect allegations.”

The leader of the Solidarity Trade Union of Myanmar (STUM), Daw Myo Myo Aye, said that they had learned that STUM was one of the 16 groups the government now considers to be illegal associations.

She said, “They have also verbally threatened employees that they will face consequences if they contact us.

Following the coup, a large number of labour militants, including the STUM head, were imprisoned for six months.

She claimed that in order to persuade businesses and consumers that the workers’ labour rights are being honoured, so-called “yellow unions,” or phoney unions, have been formed by factory owners and management.

STUM and other groups like Action Labor Rights, the Coordination Committee of Trade Unions, the All Burma Federation of Trade Unions, and Future Light Center can still function but are only able to perform a small portion of their typical operations.