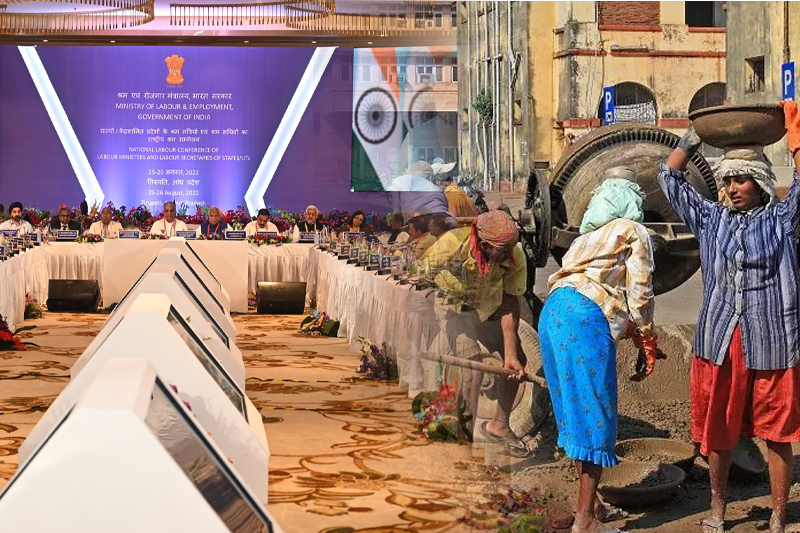 India – The Indian Labour Conference (ILC), an apex tripartite consultative committee that advises the government on worker-related issues, is being called for by leaders of the Central Trade Unions as they accuse the central government of “deceiving the public” by holding stakeholder discussions before the Labour Codes are implemented.

According to two national union leaders speaking to Newsclick on Thursday, the Center is not serious about talking to trade unions about the wide-ranging effects of the four Labour Codes. They assert that ILC meetings, whose sessions have not occurred since 2015, cannot be replaced by the’multi-stakeholder consultations’ promised by the former.

The Narendra Modi-led federal government is eager to involve all stakeholders before implementing the contentious Labour Codes after encountering strong opposition from farmers‘ organizations over the agriculture reforms, which ultimately had to be shelved. 29 central laws are expected to be replaced by the four codes. In light of this, a number of meetings with various employers, employee, and state government representatives have been organized.

A two-day National Labor Conference involving all states and Union Territories officially began on Thursday in Tirupati, Andhra Pradesh. The conference is scheduled to focus on “framing of laws under four Labour Codes and mechanisms for their implementation,” in addition to other labor-related topics. The prime minister will deliver a virtual address during the conference.

In addition, Newsclick has learned that the Center intends to hold “one-to-one” talks with central trade union representatives. The Economic Times reports that a meeting with the Bharatiya Mazdoor Sangh, a group linked with the RSS, was already scheduled for earlier this week. Meetings of similar nature are also held with employer representatives.

The Centre has invited the central trade union for a “one-to-one” meeting, which is scheduled to take place on August 31, according to Tapan Sen, general secretary of the Centre of Indian Trade Unions (CITU), who confirmed this on Thursday. “We haven’t heard anything yet about the meeting date being confirmed. The unions are not pleased with this format, though, it must be acknowledged,” Sen added.

He urged that the Center call a meeting of the ILC, whose 46th session was conducted in 2015. Even prior to the adoption of the Labour Codes, there were no meaningful triangular consultations with trade union participation. He claimed that the administration was currently only misleading the populace through conferences with state governments and one-on-one meetings with the unions.

The ongoing multi-stakeholder consultations, according to Amarjeet Kaur, general secretary of the All India Trade Union Congress (AITUC), cannot take the role of ILC. She emphasized that India has ratified ILO Convention 144, which requires three-way consultations between the government, employers, and employees.

The development of rules for the four Codes was the subject of numerous rounds of trilateral dialogue last year, although virtually. Ten CTUs had skipped these meetings, calling them a “farce,” and had suggested having a face-to-face meeting instead.

When questioned about the planned “one-to-one” meeting with the Center, Kaur stated that the ten CTUs had agreed to bring up a few “similar points,” such as the removal of the four labor codes and pressure to hold the ILC.

After the most recent stakeholder consultations, the Union Labour Ministry is reportedly planning to make a final decision about when to apply the Labour Codes. In addition, since the Industrial Relations Code, Code on Social Security, Code on Occupational Safety, Health and Working Conditions, and Code on Wages were passed in 2020 and 2019 respectively, their implementation has been postponed numerous times over the recent months.

Due to the concurrent nature of the issue of labor, both the federal government and the states must have passed laws and regulations prior to the implementation of the labor codes. There are signs that the Centre is preparing for a phased implementation with an initial release of two Codes with most states having pre-published the draft rules for at least The Code on Wages and The Code on Social Security.

Trade unions have warned the Center that if the government goes ahead with the adoption of Codes, they would turn to protest actions. The four Codes, which have been promoted as reforms, are feared by the unions to weaken employees’ rights.