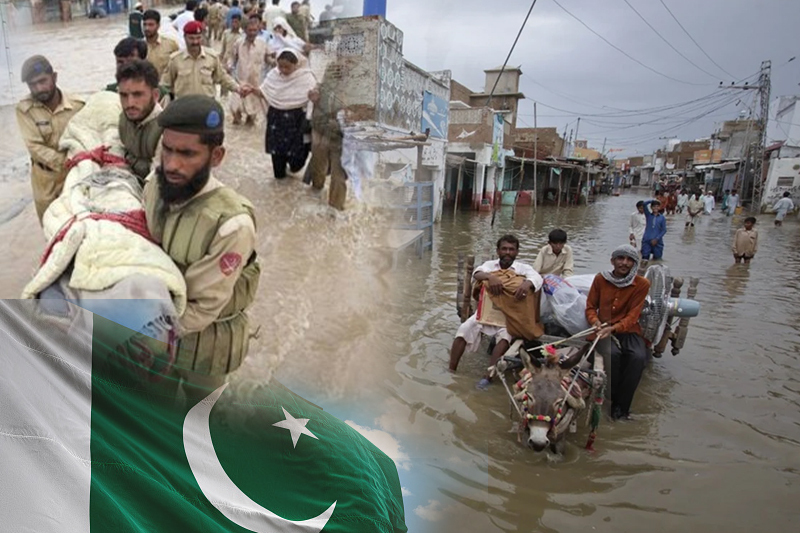 Pakistan – Heavy rains hitting Pakistan have killed more than 580 people and thousands have lost their homes across the country.

Around 1 million people have been affected by heavy rains, flash floods, and landslides since early July as more than 60% of the usual monsoon rainfall total fell in Pakistan in three weeks.

The provinces of Balochistan, Khyber Pakhtunkhwa, and Sindh have been hardest hit, with heavy rain forecast for Pakistan until Friday. At least one person died in Karachi on Tuesday as incessant rains hit Pakistan’s largest city for two consecutive days.

A woman is raped every two hours in Pakistan: Survey

In Balochistan, Pakistan’s largest and poorest province, approximately 200 people have died. This province has suffered from severe flooding for over 30 years. The National Disaster Management Authority said the province received 305% more rain than the yearly average.

Eighteen of Balochistan’s 26 districts have been declared disaster-affected by the Provincial Disaster Management Authority. People were forced to leave their homes as crops and livestock were washed away across the province. Hundreds of kilometers of roads were damaged, making areas inaccessible to emergency services.

More than 570 schools have been destroyed, and cases of cholera have been reported. Many farms were also washed away.

“We are doing our best to provide for extensive relief and rehabilitation of flood victims.” said Prime Minister Shahbaz Sharif, who visited the region for the second time this month.

“There was no pre-arrangement to deal with the flood, despite the Met Office warnings. The provincial government has failed badly. If there were no volunteers helping the victims, more people would have died of hunger,” said Jam Kamal, former Chief Minister, and MP for Lasbela.“No one has seen such rains in their lifetime,” he said.