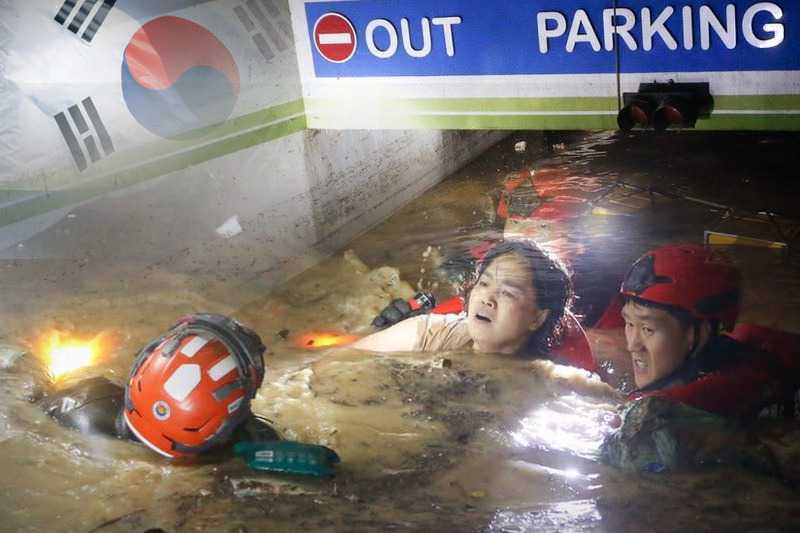 South Korea – On Tuesday, Typhoon Hinnamnor hit the southern industrial centers of South Korea. Authorities said at least 10 people died and thousands were forced to flee their homes in the aftermath.

Seven people died in a single flooded parking lot under a residential complex in the southeastern port city of Pohang, according to a report from the Ministry of the Interior and Security released on Wednesday.

According to a ministry report, seven people were trapped by rising water as they tried to move their vehicles.

Local broadcaster YTN aired footage of the wrecked car being pulled out of an underground garage where muddy waters blocked the entrance.

Another person died after being buried in a house hit by a landslide in Gyeongju, and two people are still missing from a massive typhoon. Losses could rise as rescue operations continue as the military mobilizes amphibians.

The powerful storm hit with winds equivalent to a Category 2 hurricane, with winds in excess of 154 kilometers per hour or just over 95 miles per hour.

The storm made landfall around 4:50 am local time, hitting the southeastern industrial cities of Pohang, Gyeongju, and Ulsan with strong winds and heavy rain before leaving the peninsula around 7:10 am local time, authorities said on Tuesday.

About 2,900 people were evacuated, mostly in the south of the country, and more than 66,000 houses were cut off from electricity, with 45% of electricity restored as of 15:00. the local time. The typhoon has caused hundreds of flights to be canceled, business suspended and schools closed.

South Korean steel company POSCO reported a temporary release of by-product gas at its plant in Pohang due to a power outage caused by a typhoon.

Ulsan-based shipbuilder Hyundai Heavy Industries said there were no major casualties, although parts of its plant were flooded. Some of his ships have been sent to the west coast to prevent damage and will return on Thursday.

A spokesman for Daewoo Shipbuilding & Marine Engineering said there had been no incidents so far at its shipyard in nearby Changwon and production was halted Tuesday morning as planned.