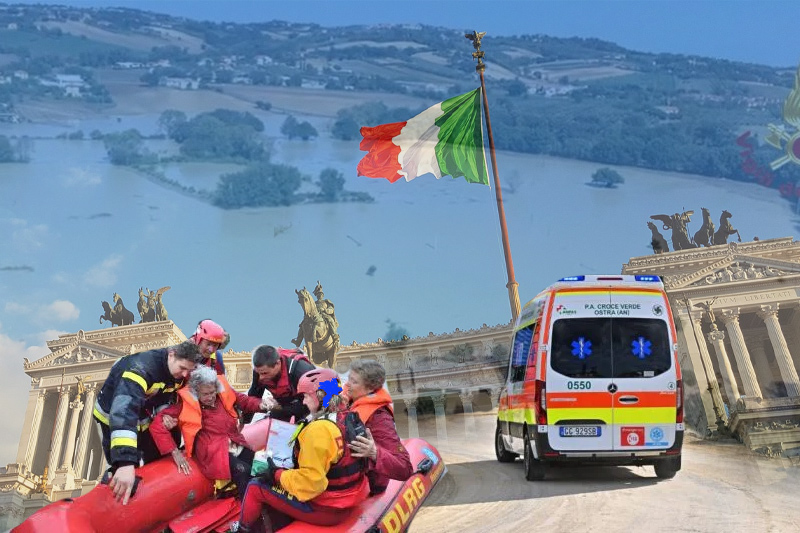 floods and rains kill at least 10 people in italy overnight

Italy – Heavy rain that fell late Thursday night caused rivers and streams to burst their banks and flood coastal towns around the regional capital of Ancona. In just a few hours, about 400 mm (16 inches) of rain was recorded – in half a year.

Authorities said at least 10 people were killed in a flash flood that hit Italy’s Marche region overnight. Rescuers are still looking for four more people, including a child who was separated when the river overflowed its banks.

“It was like an earthquake.” said local mayor Ludovico Caverni to RAI state radio.

According to one local report, the mother, who managed to get out of the car with her child in her arms, was separated from him after she was flooded with water when the Misa River overflowed its banks.

Rescuers managed to rescue the woman overnight, but her six-year-old child is one of several missing, local media reported. In addition to the 10 dead, Italian newspapers report that about 50 people are being treated in hospitals for hypothermia and other injuries sustained during the flood.

More than 180 firefighters are helping with the rescue efforts, evacuating people who were forced to climb trees or climb onto rooftops during the night to escape the rising water. Some of the rescuers used rafts and helicopters to reach stranded families, footage shows.

An unusually dry summer left nearby coastal land parched and unable to absorb the copious amounts of falling water. Even though rain was forecast for the region, local officials say the ensuing flash floods took everyone by surprise.

Meteorologists said the severity of the flooding was due to a combination of two factors: unusually hot September temperatures and persistent summer drought. The heat meant that the sea was warmer than usual for this time of year, and more moisture got into the air.

When the storm then released moisture as rain, a severe summer drought meant the ground was too dry to absorb the falling water quickly enough. Unusually hot weather and low rainfall have exacerbated water shortages in northern Italy and raised concerns about the effects of climate change.