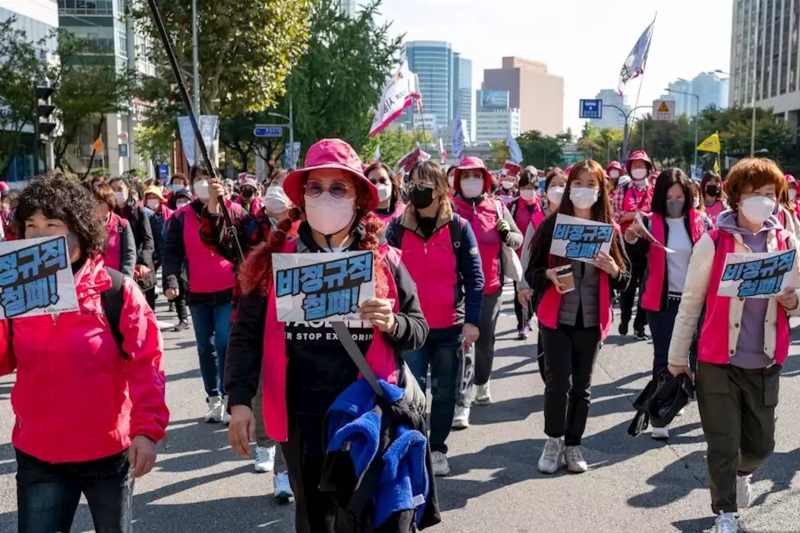 fed up with one sided rulings, this year no one can delay labor uprising in south korea

South Korea – is a huge man power driven country. The market in which the country excels requires large numbers of people in the manufacturing sector and hence they are dependent on daily wages especially after the country had adopted heavy reliance on the capitalistic culture.

It was only time that the laborers who have been kept away from basic rights and mandates revolt against the ongoing practice. A trailer was seen on January 15, a group consisting of rural farmers, the urban poor and laborers. They decided to gather in downtown Seoul for a National All-People’s Mobilization.

This was marked as a protest against the authorities where the workers demanded better conditions, broader labor protections and policies, and structural reforms for themselves.

It’s high time that the South Korean government listens to the demand of this section especially given the fact that they are the ones who are running a major part of the country’s economy. Having said that, the government has not entirely been negligent towards their issues.

It utilized the pandemic duration to identify and regulate certain companies and their labor policies. The government expressed concerns about their safety in organization after reports of them not providing sufficient ways to deal with pandemic came into picture.

Unions were formed, leaders of different workers organizations came together and all of them planned to protest against the authorities in power. This was the moment of uprising for the workers. Started in full swing in mid-January, the protest is still very much in process in different parts of the country where the workers face disastrous work conditions.