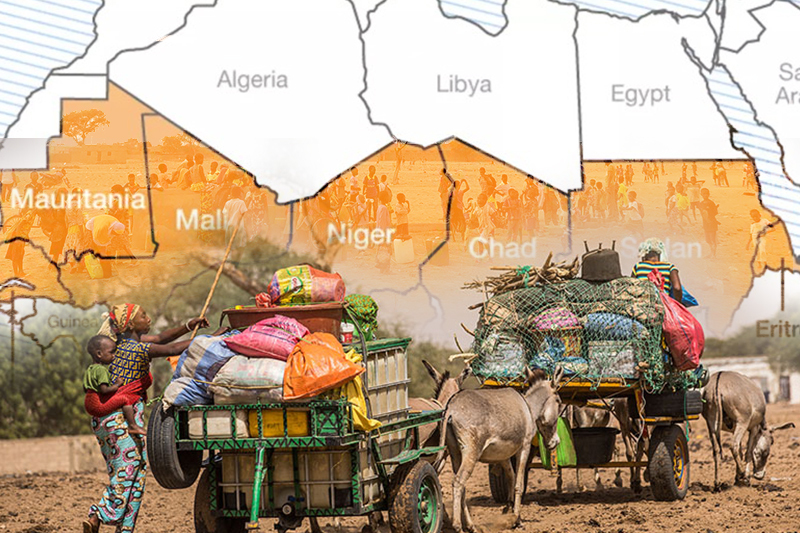 West Africa – Sahel region is not new to conflicts and crises. Burkina Faso, Niger and Mali have for years faced regional unrest and migration due to climate changes. The growing food insecurity has now been added to this list. In about 90 per cent of households in the Sahel countries of Mali, Niger and Burkina Faso, basic essentials such as access to water, healthcare, education and security “can no longer be met”, according to a report by the Geneva-based REACH Resource Center, that was released on July 21, 2022.

As noted by Info Migrants, “Sahel’s food insecurity, aggravated by the war in Ukraine which has disrupted grain exports, could push scores of migrants to flee the region and move north”. Similar concerns were raised in June by UN High Commissioner for Refugees Filippo Grandi, who had said “Europe should be much more worried that more people from the Sahel region could arrive”.

“People are still suffering — they do not have food, do not have water, do not have shelter and have to flee,” Grandi said. “I’m very worried about Sahel. And I don’t think that we talk enough about this region that is, by the way, so close to Europe. And I think Europe should be much more worried.”

International Organization for Migration (IOM) has noted that there has been a “significant increase” in flow of migrants “through Niger and Mali toward North Africa in the first quarter of 2022 compared with previous years”. According to news agency Reuters, the number of migrants that had fled Niger during time period of January to April was over 45 per cent more than migration of people during same time frame in 2021.

Violence and Climate change – the most prominent driving forces for migration

Regional conflicts, terrorism, extremism and gang wars along with the climate change like floods, droughts are making the everyday life increasingly difficult for the people in the region. REACH report also found that rising food insecurity is also a major reason for people to flee the region. “More than 70 per cent of households in Burkina Faso and Niger are dissatisfied with water, health and sanitation facilities,” it added.

Conflicts have forced many schools and institutes to shut down in the region, creating negligible educational opportunities.

“Over the past decade, the Sahel crisis has spread from Mali’s north toward the center, but mainly spilling into neighboring Burkina Faso. Niger is also increasingly affected. Over 2.5 million people are on the run due to the violence,” REACH reported.

Furthermore, the global pandemic and ongoing Ukraine war has further aggravated the crisis in region, pushing the people to move towards north and Europe.