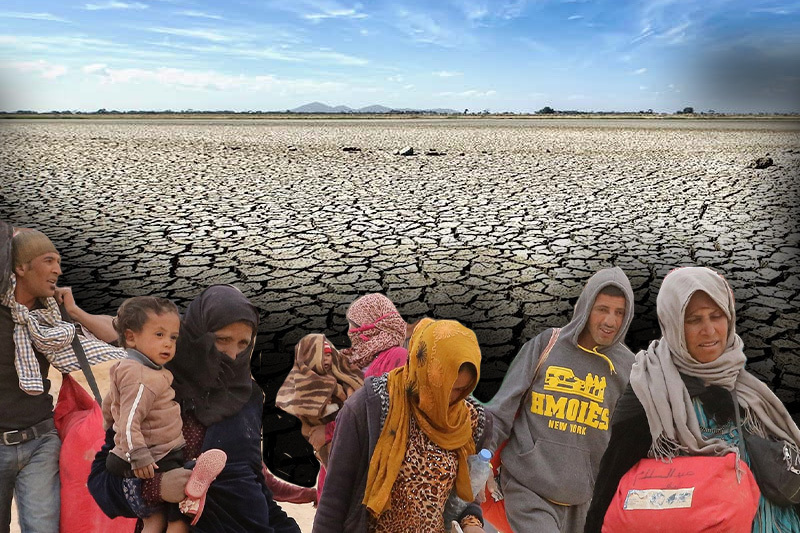 Global – Climate change is progressing at an unprecedented rate, more than what was anticipated by the experts. The alarming rate of change in climate is largely attributed to fossil fuel burning, such as coal. Furthermore, wildfires due to soaring temperatures, floods and droughts are further complicating the situation. All these factors, with amalgamation of regional conflicts exacerbated by climate crisis impacts are leading to migration of people in large numbers.

The migration led to climate change is leading to uprooting of people in search of some better prospects. According to the United Nations High Commissioner for Refugees, an average of 21.5 million people are forced to flee their homes and migrate due to natural disasters and climate crisis. Over the next 30 years, 143 million people are projected to be uprooted by floods, drought, soaring temperatures and other climate catastrophes, according to the UN’s Intergovernmental Panel on Climate Change report that was published this year.

Evidently, climate migration is a daunting reality, but official recognition of the same by world is still lacking.

What is Climate Migration and who are climate migrants?

A movement of people from their land to another place within the same country or other nation, triggered by climate change impact is climate migration. Identifying the exact status of climate migrants is tricky, due to additional factors such as poverty, violence and regional conflicts.

Though deteriorating climate can be also trigger and exacerbate poverty and violence, climate change is often overlooked as the reason or contributing factor for people fleeing their country.

According to the UNHCR, “90 per cent of refugees under its mandate are from countries on the front lines of the climate emergency.” This is primarily more notable in Africa and Latin America.

“It’s hard to say that someone moves just because of climate change. Is everyone who leaves Honduras after a hurricane a climate migrant?” Elizabeth Ferris, a research professor at the Institute for the Study of International Migration at Georgetown University makes a valid argument. “And then there are non-climate related environmental hazards – people flee earthquakes, volcanic eruptions and tsunamis – should they be treated differently than those displaced by weather-related phenomena?”

Despite the evident contribution of climate change to migration, climate migrants are not granted a refugee status under the 1951 Refugee Convention. This means they are not covered by the legal protection that is granted under this convention to “people fleeing persecution due to their race, religion, nationality, political opinion or particular social group.”