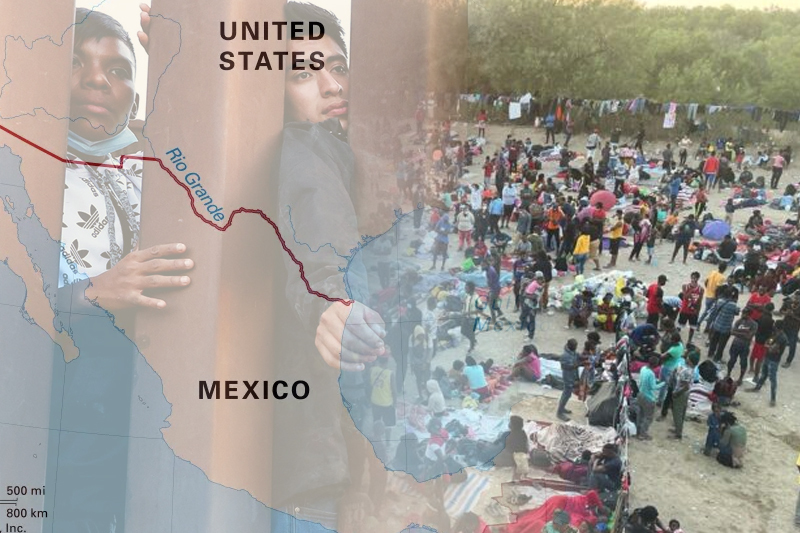 why thousands of migrants are waiting in mexico

Mexico – Thousands of migrants continue to arrive daily in the city of Reinosa on Mexico’s northern border. Most of the newcomers are Haitians. About 12,800 migrants are waiting in Reynosa. Two of its Senda de Vida shelters provide enough food and tents for almost 6,000 people.

Life in shelters is an exchange. Thousands of people use shared bathrooms, showers, washing machines, clotheslines, and mobile phone charging stations. Outside the women’s restroom, rules for the use of the area are posted in two languages, including reminders to keep it clean.

Life outside the gates of the asylum is survival. Migrants set up makeshift camps – one of them is located just a few meters from the banks of the Rio Grande. About 350 people live there, according to Alma Ruth, founder, and director of the Practice of Mercy Foundation.

Unlike shelter tents that stand on either concrete or gravel, some of these tents stand on earthen or wooden pallets. The migrants built makeshift outdoor stoves by placing metal grates on cinder blocks on bare ground.

This year, the number of migrants waiting in border communities in northern Mexico, including Reynosa, has increased ahead of the repeal of Section 42, the Trump-era public health executive order that has been used nearly 2.2 million times to expel U.S. migrants to Mexico and other countries.

In April, more than 7,000 migrants, mostly from Central America and Haiti, waited in Reynosa for the repeal of Section 42.

The result in the border towns was stunning. The shelters were packed with desperate people. The public square at the foot of the international bridge became a tent city, where some migrants slept under tarpaulins and didn’t know where to get their food next. Many of which escaped violence and extortion in their countries, easy prey for criminal organizations.

Promise of help and safety

About a dozen migrants at the shelter said they also learned from social media sites such as Instagram and Facebook that an organization in Reynosa helps migrants legally cross over to the United States.

This is a fairly common form of online hope that often puts the most vulnerable at bay.

Federal immigration authorities also warn that transnational criminal organizations are using disinformation to lure migrants into the dangerous and costly journey to the US’s southern border. In June, the Department of Homeland Security said it had launched an unprecedented operation to disrupt human smuggling networks.