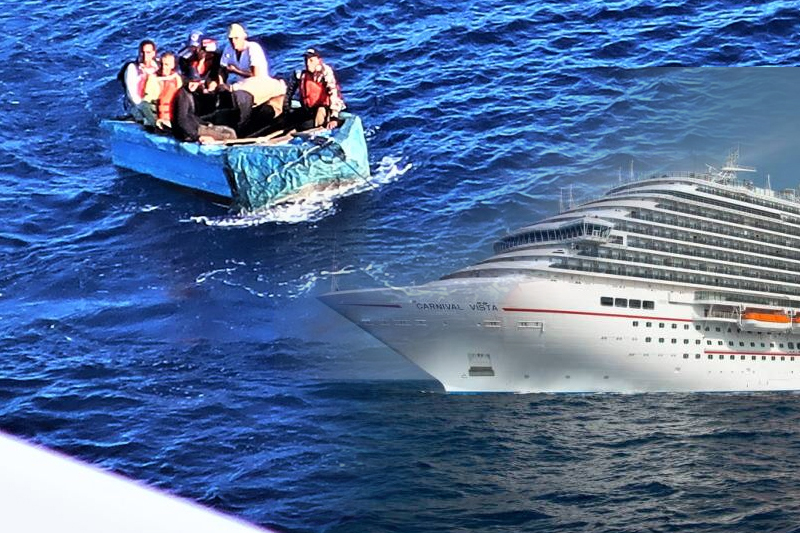 US – The cruise ship Carnival Cruise, Carnival Paradise, which sailed from Tampa, Florida to Cozumel, Mexico, stumbled upon six Cuban migrants drifting at sea on a makeshift raft. As seen in a video circulating online, the migrants were rescued by a cruise ship last week.

As the cruise ship passengers say, migrants didn’t have a paddle. It wasn’t actually a boat, it was a piece of furniture, possibly a cupboard that had been made into a makeshift boat.

The video shows what appears to be a small piece of cloth that the migrants used as a sail and Styrofoam attached to the sides of their vessel for buoyancy. It was also said that the migrants also used a pot lid to row.

According to Carnival Cruise Lines spokesman Matt Lupoli, the migrants were welcomed aboard the ship, where they underwent medical examinations, and received food and clothing. According to him, when the ship reached Cozumel, it was handed over to the Mexican authorities.

According to eyewitnesses, the captain of the ship announced to the passengers that the migrants were dehydrated, but otherwise, everything was in order.

Cubans who come to the United States and seek asylum can usually be granted permanent residence under the special status granted by the Cuban Settlement Act of 1962. Cubans caught at sea by the US Coast Guard usually return to the island.

As Cuba faces growing power outages and food shortages, a record number of Cubans have left the island, either by crossing the southern border with Mexico to the US or by sailing out to sea in small boats and rafts.

More than 175,000 Cubans have entered the US from Mexico since July last year, according to US Customs and Border Protection. During the same period, more than 4,500 Cubans intercepted at sea have been returned to Cuba, the Coast Guard said in a statement Tuesday.