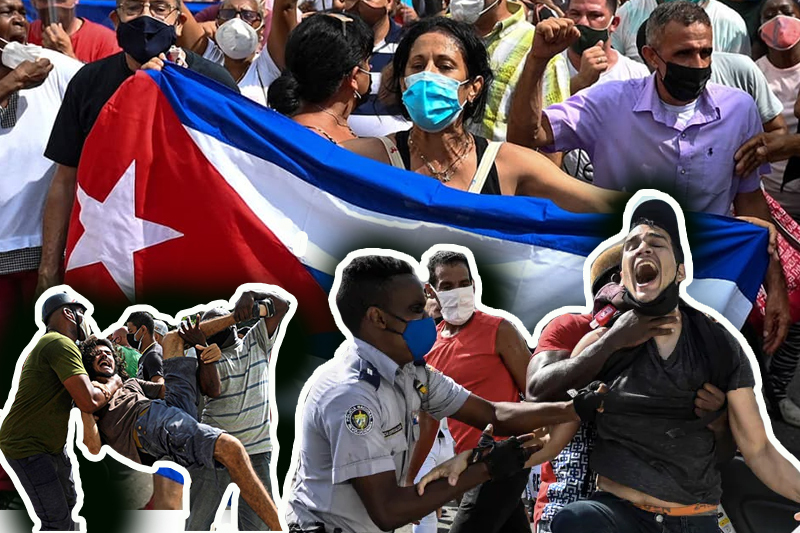 Cuba – The anniversary of the protests, that the Cuban government violated human rights routinely in reaction to large-scale anti-government rallies in July 2021, seemingly in an effort to punish protestors and discourage other demonstrations, Human Rights Watch claimed in a report released today.

“Prison or Exile: Cuba’s Systematic Repression of July 2021 Demonstrators,” a 36-page report, details a variety of human rights abuses related to the protests, including arbitrary imprisonment, abuse-filled prosecutions, and torture. Repression by the government and its seeming refusal to address the underlying issues that led Cubans to take to the streets, such as poor access to food and medication, have led to a human rights crisis that has caused a huge rise in the number of individuals leaving the nation.

According to Juan Pappier, senior researcher at Human Rights Watch, “a year ago today, thousands of Cubans marched, demanding rights and freedoms, but the government gave many of them just two options: prison or exile.” “Before this human rights catastrophe worsens considerably further, governments in Latin America and Europe should urgently increase their human rights oversight over Cuba and give priority to a unified, multinational response.”

On July 11, 2021, thousands of Cubans participated in the largest statewide anti-government protests since the Cuban Revolution of 1959. These nonviolent demonstrations were a response to the government’s handling of the COVID-19 outbreak, long-standing rights restrictions, and a lack of food and medicine.

More than 170 people were interviewed by Human Rights Watch in Cuba, including abuse victims, their loved ones, and attorneys. In addition, Human Rights Watch examined case files and confirmed images and videos given to researchers and discovered on social media sites. Internationally renowned forensic specialists from the Independent Forensic Expert Group of the International Rehabilitation Council for Torture Victims shared their professional insights on certain evidence of abuses.

President Miguel Daz-Canel ordered government supporters and security personnel to put down the protests with force soon after they started. He stated that we urge every revolutionist to take to the streets in support of the revolution. “There has been a call to arms.”

Diubis Laurencio Tejeda, a 36-year-old singer who was a demonstrator, passed away, ostensibly at the hands of the police. According to the Cuban human rights organization Cubalex, over 1,400 people were detained, including more than 700 who are still in jail,

Officers frequently apprehended nonviolent protesters, detained opponents as they were leaving for rallies, or forbade them from leaving their homes for days or weeks.

In the majority of known instances, detainees were kept incommunicado for days, weeks, or perhaps even months without access to telephones, visitors, or legal representation. Some were tortured, including by being beaten, made to squat naked, or endured other cruel punishments such as sleep deprivation.

More than 380 protestors and onlookers, including some youngsters, have had their convictions upheld by Cuban courts. Military courts were frequently used for trials, which is against international law. Many people who were accused of taking part in violent acts, including throwing rocks during the rallies, were charged with “sedition” and given excessive prison sentences of up to 25 years.

Prosecutors painted as crimes such constitutionally protected activities as peaceful protest or making derogatory remarks about the president or the police. People have been found guilty based on suspect or unsupported evidence, such as comments made only by security personnel or purported “odour traces” of the defendants discovered on rocks.