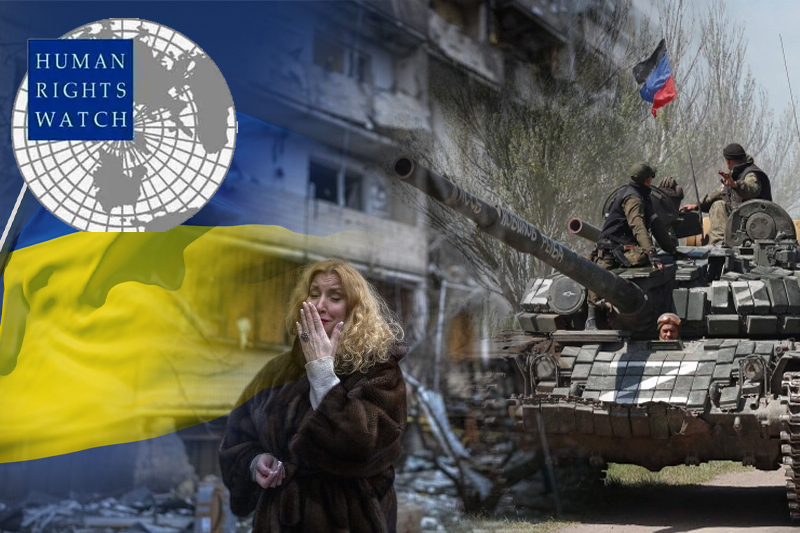 Ukraine – Human Rights Watch today released the 100-page global Cluster Munition Monitor 2022 report, claiming that the continuous use of cluster munitions by Russian forces has harmed hundreds of civilians in Ukraine in a predictable and long-lasting way. The 2008 international convention banning cluster munitions should be ratified by both Russia and Ukraine, who should both reject their usage.

Cluster munitions cause immediate and long-term suffering to people, making their use in Ukraine today reprehensible and always illegal, according to Mary Wareham, head of arms advocacy at Human Rights Watch and editor of the Cluster Munition Monitor 2022. “All nations should strongly condemn the use of these weapons in any situation.”

Artillery, rockets, and mortars can fire cluster munitions from the ground, and they can also be dropped by aircraft. Usually, they explode in the air, scattering several bomblets or submunitions over a large region. Many submunitions are lethal duds that can indiscriminately maim and kill like landmines for years until they are cleaned and destroyed. Many submunitions do not explode upon impact.

Human Rights Watch discovered that in May and June, Russian forces in Kharkiv, the second-largest city in Ukraine, launched cluster munitions rockets, which contained submunitions that hit residences, city streets, parks, an outpatient clinic at a maternity hospital, and a cultural center. In an attack on the nearby settlement of Derhachi on May 12, a lady cooking in her garden was killed instantly, and her husband’s legs were cut; he died some hours later.

These weapons are completely outlawed under the 2008 Convention on Cluster Munitions, which 110 nations have ratified and 13 more have signed. Since the convention’s adoption on May 30, 2008, there have been no verifiable reports or claims of new uses, productions, or transfers of cluster munitions by any state party.

Regardless of whether a country has ratified the convention, Cluster Munition Monitor 2022 tracks global efforts to eliminate cluster bombs. For the first time in ten years, there were no new cluster munition injuries in 2021, although there were 147 new cluster munition casualties from remnants in eight different nations. Two-thirds of all fatalities where the age of the victims was noted involved children. The new use in Ukraine since February 2022 has outweighed this significant decrease in cluster munitions casualties.

As cluster bombs are phased out of use in several of the 47 countries, HR Watch discovered that the tight standards established by the Convention on Cluster Munitions have impacted government development and procurement plans.

Russia has utilized both its old stockpiles of cluster munitions and its most recent ones in Ukraine as of 2022. There is no proof that any of the artillery, rocket systems, or other weapons the Ukrainian government acquired from outside sources in 2022 were cluster munitions as specified by the convention.

The good trend away from cluster weapons has been defied by other military superpowers. New cluster munitions are being intensively researched and developed by China and Iran.

Cluster munitions were last produced in the United States in 2016, but the country hasn’t vowed to stop ever producing them or joined the international ban.

As of 2022, Russia has used both its older and more modern stockpiles of cluster munitions in Ukraine. The Ukrainian government purchased artillery, rocket systems, and other weapons from foreign sources in 2022, but there is no evidence that any of them were cluster munitions as defined by the convention.

Other military superpowers have withstood the positive trend away from cluster weapons. China and Iran are conducting extensive research and development on new cluster munitions.

The United States last produced cluster munitions in 2016, but it hasn’t made a commitment to never again create them or ratified the international prohibition.

The Cluster Munition Coalition (CMC), a global alliance of humanitarian groups co-founded and led by Human Rights Watch, publishes the Cluster Munition Monitor every year. The study will be distributed to nations attending the 10th annual convention on cluster munitions, which will take place at the UN in Geneva from August 30 to September 2.

The extensive deployment of cluster munitions by Russia in Ukraine serves as a sobering reminder of the challenges the convention must overcome to successfully put an end to the suffering these indiscriminate weapons create, according to Wareham. Governments who have not yet ratified the treaty should reconsider their stance and join the campaign to ban cluster bombs.