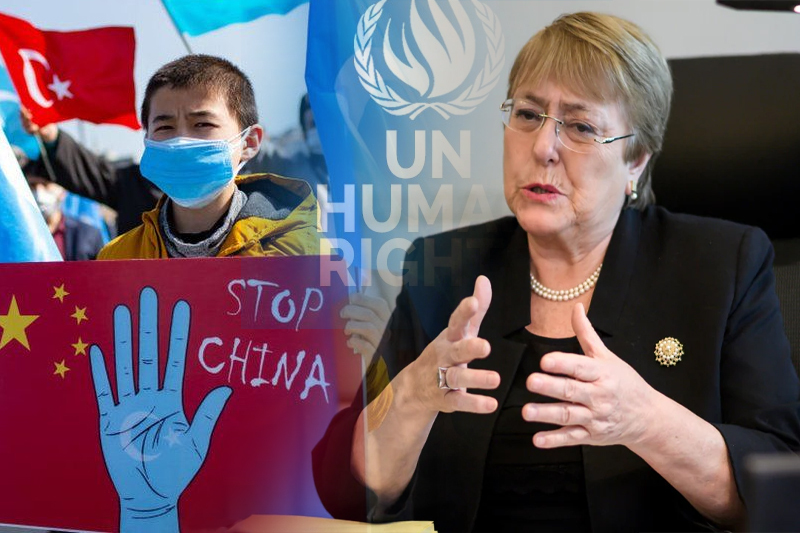 China – Michelle Bachelet, the head of the UN Human Rights Commission, has hinted that she might not fulfil her commitment to release the long-awaited report on Xinjiang, a region of China in the country’s far west, before she leaves office the next week.

Austin Ramzy, a Hong Kong reporter who focuses on coverage of the city, wrote in The New York Times (NYT) that the high commissioner for human rights has repeatedly postponed its release, reinforcing perceptions that UN leadership is reluctant to stand up to China. Nick Cumming-Bruce reports from Geneva on the United Nations, human rights, and international humanitarian organisations.

She has already been under harsh fire from human rights organisations due to the postponement of that report, which Beijing has attempted to stop.

Four years after academics, activists and independent UN experts first sounded the alarm over reports that China had arbitrarily detained more than a million Uyghurs and members of other predominately Muslim groups in Xinjiang, human rights groups have looked to the United Nations to provide an independent assessment that could help hold Beijing accountable and bring some relief to victims and their families.

Following her return from an official visit to China in May, Bachelet imposed a deadline of the end of August, which she claimed she was “working very hard” to accomplish on Thursday, according to NYT.

She claimed that as is customary for her office, a draught of the report had been sent to the Chinese government. They had to consider “significant input” from China before it could be published.

According to Bachelet, the report her office had prepared would examine in-depth the reports of abuses of human rights, and her office would only consider declarations of fact in China’s response.

Nevertheless, according to Cumming-Bruce and Ramzy, the likelihood of the report’s further delay has increased activists’ irritation and reinforced their belief that the UN human rights office has fallen short of its goal of defending the rights of abuse victims.

China wanted a press conference much like this. That kind of reaction will only give Chinese authorities and other autocrats more power, according to Sophie Richardson, Human Rights Watch’s China director. “This is a really alarming sign for the UN human rights system’s ability to take on big states,” one person said.

Since Bachelet’s office initially hinted at plans to release the findings of its probe into China’s repression in Xinjiang, ten months had passed.

The release of the study has been repeatedly delayed by Bachelet without much justification, confusing diplomats, human rights activists, and even parts of her own staff.

Her spokeswoman stated in December that the report would be published in a matter of weeks, but it never materialised, furthering views of a United Nations leadership unwilling to confront China.

According to Cumming-Bruce and Ramzy, Secretary-General Antonio Guterres has refrained from publicly criticising China, which is the second-largest contributor to the UN budget, a major troop contributor to UN peacekeeping, and a crucial partner in his efforts to advance the UN’s Social Development Goals, despite the severe UN budget crunch and a Security Council that is frequently paralysed by division.

Bachelet has mainly kept her remarks on Xinjiang to polite statements of worry over mistreatment allegations. She explained on Thursday why she had chosen to put her trip to China, the first by a UN rights chief in 17 years, over publishing the report.

Notably, according to the NYT, former detainees in Xinjiang have detailed physical assault, mistreatment, and lengthy indoctrination sessions in official Communist Party philosophy.

When Bachelet mentioned receiving “vast numbers” of letters every day for the past year during her last news conference, it provided a glimpse of the strain she experienced while compiling the report. According to Bachelet, they included a letter from China that was signed by almost 40 nations pleading with her not to release the report.

The release of the report, according to the text of the letter written by China and distributed among diplomatic missions in Geneva recently, would “intensify politicisation and bloc confrontation in the area of human rights,” damage the credibility of her office, and harm its relationships with member states.

While this is going on, China dismisses claims of atrocities in Xinjiang as “lies,” and its response to the UN investigation reflects Beijing’s worries about defending its Xinjiang policy from criticism abroad and its determination to discourage governments from taking action in the Human Rights Council.