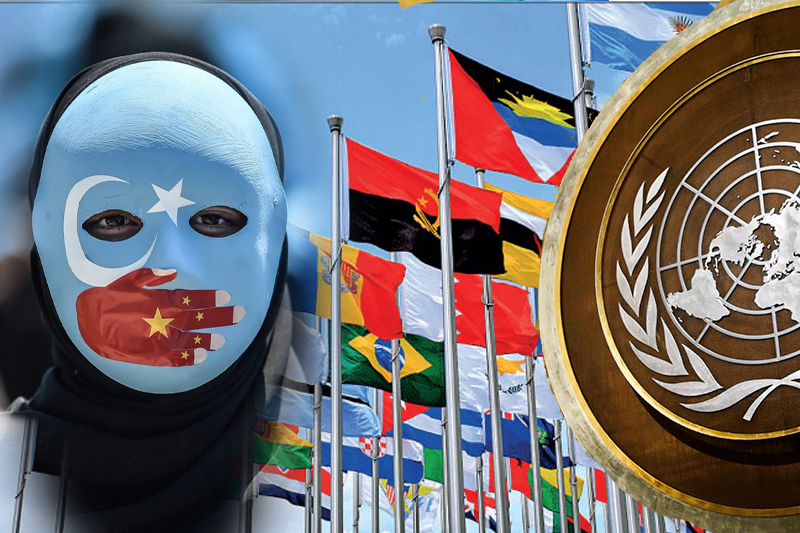 China – In response to the 48-page UN report’s allegations of human rights violations in China’s Xinjiang Uygur Autonomous Region, Chen Xu, the country’s ambassador to the UN, blasted the organisation in Geneva on September 9 and claimed it had “closed the door of cooperation” by publishing the so-called assessment, which was made up to appease Western politicians.

Even Michelle Bachelet, the UN High Commissioner for Human Rights, who released the “evaluation” minutes before her tenure came to an end, had already said earlier in June that she would not run for re-election, possibly due to pressure from the U.S.-led West, according to the Global Times.

The U.S. has always used the human rights issue as a tool to further its interventionist foreign policy objectives. According to a South China Morning Post investigation, the practise has been in line with its goal of achieving global hegemony by “covering up its own discretions, dismissing others when it’s convenient, and exaggerating or even making up the misdeeds of rivals.”

Since its inception in 1776, America has carried out approximately 400 military interventions around the world, according to the Military Intervention Project database. The database has shown that during its lengthy history of interventionist foreign policy, most interventions, especially those that took place after 1990, when it first emerged as a unipolar hegemony, were justified by so-called liberal principles, particularly democracy and human rights.

The United States may have cynically internalised human rights as a means of advancing its hegemonic agenda in place of the moral and ethical compass it claims to hold dear, according to a leaked internal memo sent by the former Assistant Secretary of State for International Organization Affairs—Brian Hook—to the then-Secretary of State Rex Tillerson and published by Politico in December 2017. The memo was adamant about using human rights as a weapon against its opponents.

As it says, “To pressure, compete with, and outmanoeuvre them [adversaries]” and “Allies should be treated differently-and better-than adversaries.” In regards to its relations with China, Russia, the DPRK, and Iran, the U.S. “should see human rights as an important issue.”

The letter goes on to discuss the ultimate goal of fabricating human rights claims against its competitors: “to impose expenses, apply counter-pressure, and tactically recapture the initiative from them.”

The U.S. has always utilised its long-enjoyed control and advancement mechanism over the global system and institutions in its human rights project as a broader foreign policy agenda-advancing instrument and ultimately coercing its enemies to bring them to their heels.

First off, the U.S. has unilaterally used its overwhelming influence over the global political and economic system—which is fundamentally flawed and has leaned toward the West since its inception after World War II—to exploit human rights against its rivals, usually in a clinical and selective manner.

Some of the enforcement measures being blatantly used against its enemies include the blatant imposition of extraterritorial jurisdiction over its domestic law; the weaponization of international economic interdependence; and the politicisation of global public goods.

The diplomatic boycott of the Beijing 2022 Winter Olympics by some of those empire agents, as well as the futile attempt to turn the event into a demonization campaign against China, demonstrate that the United States has always had other Western nations on its side in this project, weaponizing human rights discourse to its geopolitical interests.

Second, international human rights organisations have long been accused of participating in the militarization of human rights discourse because of their interdependent relationships with its primary supporters in Europe, the United States, and Japan.

Organizations like Amnesty International and Human Rights Watch frequently play a role in fabricating broader consent to the allegations while the West, particularly the U.S., serves as the centre of the global “human rights industrial complex” and manufacturing machine in fabricating human rights allegations against its adversaries.

These Western-funded groups have been charged with picking and choosing which issues to address in order to further the stated foreign policy objectives of Western governments and with remaining silent on issues that might run counter to those objectives.

When the United States cancelled visas for members of the International Criminal Court in April 2019 because of efforts to look into allegations of war crimes committed by American troops in Afghanistan, it was an example of the blatant discrimination practised by those institutions.

Third, military intervention taken to its logical conclusion in the name of defending or advancing human rights is a common tactic for advancing an agenda.Human rights discourse was used to justify conflicts from Nicaragua to Syria and from Iraq to Libya, which ultimately resulted in the slaughter of people and the destruction of their rights. Nowadays, wars are frequently referred to as “humanitarian interventions.”

The “Xinjiang narrative” has historically been associated in Western discourse with terrorism and violent separatism. But in recent years, the debate has steadily shifted to the alleged commission of crimes against humanity or acts of genocide against the Xinjiang region of China. This is especially true under the Trump administration when anti-Chinese sentiment was at its peak. It is clear that claims of alleged human rights breaches in Xinjiang have been pushed harder and harder as geopolitical antagonism toward China has grown.

The United States and China are engaged in a fierce strategic conflict that is being fought on several fronts to control China. One of the many containment frontiers that the United States has long been accustomed to waging against its adversaries in such a full-fledged cold-war-like geostrategic competition, as seen in one against the Soviet Union, is to demonise them by hurling accusations of human rights violations—sometimes even fabricating a far-from-near-truth.