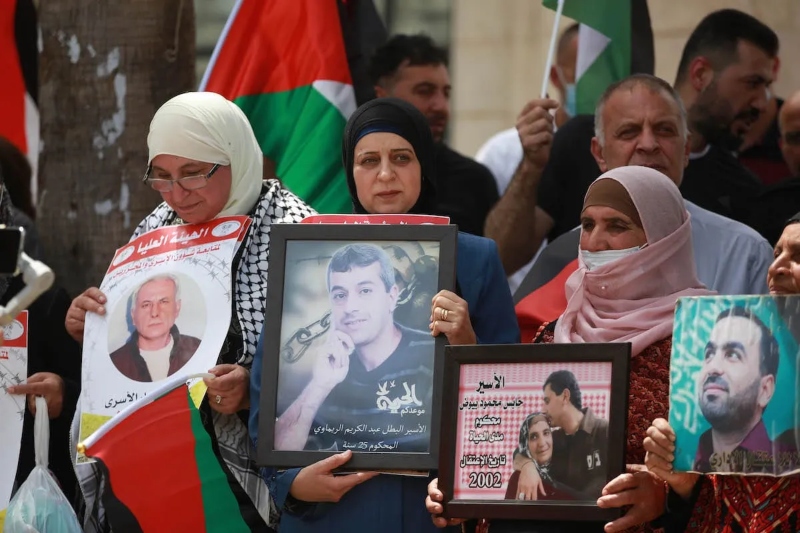 Gaza – Dozens of mothers of prisoners in Gaza ,a Palestinian enclave on the eastern coast of the Mediterranean Sea, were denied permission to meet their sons. On April 17, when Palestinians commemorate Prisoners’ Day, the mothers were denied access to meet their children in Israeli prisons.

Reportedly, they have been denied access to meet their children in Israeli prisons for nearly 6 years. A Palestinian, Fayza Abu Al-Qumboz, becomes more afraid of dying because she think she will not be allowed to meet her son before she dies. She wants to meet her son, Majed, who has been in Israeli prisons for 16 years. The last time she met her son was in 2016 in Nafha prison. She said, “I am afraid to die before seeing Majed free.”

Reportedly, Israeli forces arrested Majed, his two brothers, his brother-in-law and nearly 40 members of his family and neighbours during their invasion of Al-Shojaeya neighbourhood, east of Gaza City, in August 2006. They released most of the members at different times. However, Majed was sentenced to 19 years in prison on charges of belonging to the military wing of Hamas. The Hamas is a Palestinian Sunni-Islamic militant.

Majed’s mother participated in weekly activities in front of the headquarters of the International Committee of the Red Cross in Gaza to demand justice for many years. However, illness and the inability to walk have prevented her from participating in recent events.

The human rights institutions have obtained a judicial decision to allow family members to visit prisoners again after they were stopped during the Covid-19 pandemic. However, the decision excluded about 70 Palestinian prisoners belonging to the Hamas group. Reportedly, Israel prevents visit to Hamas and Islamic Jihad prisoners in an attempt to pressure Hamas to release four Israelis, which the group has been holding for years. Nearly 5,000 Palestinian prisoners are held in the Israel’s prisons.