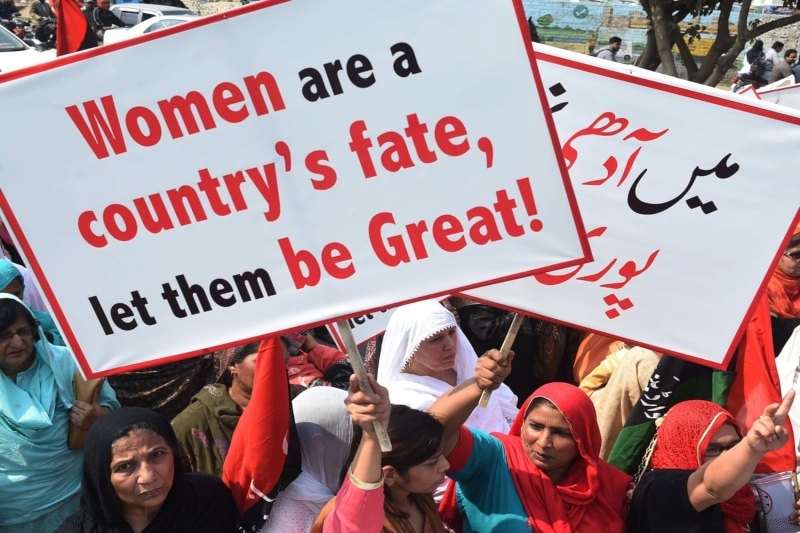 the women of pakistan march in solidarity on international women’s day despite threats from extremists and other interest groups.

Pakistan – In 2021, Pakistan ranked 167 out of 170 countries in the Global Women Peace and Security Index. There are innumerable examples of women being tortured and abused in Pakistan. Despite progress in addressing the violence against women, domestic abuse, forced marriage, acid attacks, rape and honor killing remain a serious problem and women here face harrowing accounts with sexism and violence.

The Prime Minister himself drew flak when he stated “If a woman is wearing very few clothes it will have an impact on the man unless they are robots. It’s common sense.” In another instance, he said women should “remove temptation because not everyone has willpower.”

Today, women in Pakistan are coming forward to fight back and voice their opinions and choices. This however, comes with continued threats, ridicule, and accusations from religious extremists.

Now more than ever, women are taking matters into their own hands.

The Aurat March was started on March 8th 2018, by a small group of women to mark International Women’s Day. Since its inception, the Aurat March – also called the Women’s March, has grown into a giant movement for Pakistan’s women.

As attendance grows each passing year, the movement is gaining momentum in bigger cities from Islamabad to Karachi to Lahore. Women use the Aurat March as an opportunity to form bridges across divisions and come together keeping aside all religious beliefs, regional identities and gender identities. The march aims to encourage women to learn from each other and celebrate their choices.

Rights activists claim gender-based violence are on the rise as Pakistan moves toward religious extremism. One such case that shook the Pakistani capital of Islamabad was a gruesome murder in an upscale neighborhood here.

A member of the country’s elite, a 27-year old daughter of a diplomat in Islamabad jumped from a window, after which she was dragged back, beaten and then beheaded by a childhood friend. This threw a spotlight on the unabated barbarity against women in Pakistan.  It is apparent that these atrocities see no status. The majority of women who face such violence, however, often belong to the middle class and poor; and their deaths are usually ignored.

The Aurat March brings light to such cases happening in Pakistan.

The slogans chanted here in chorus are born out of real stories of oppression of women who have faced violence and have been denied bodily autonomy. They also chant to raise their voice in support of their choice of clothes, sexuality and beliefs such as the prevention of female infanticide.

The opponents of this movement often see women as a “soft target”, but the organizers claim that no opposition will be strong enough to bring down the Aurat March. These women-led rallies are growing each year and has seen a seismic change in ideologies based on gender and violence.