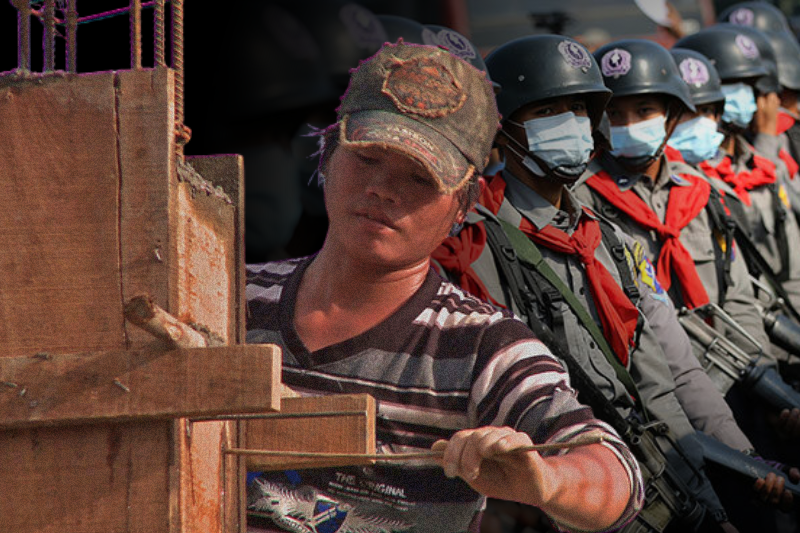 Myanmar – Many workers are in the worst conditions in Myanmar. Employed people face daily violations of labour rights. There are also many jobless people in the Southeast Asian nation.

The violations of labour rights have risen in the country since the military coup in February 2021. When the army seized power in 2021, labour activists were some of the first organizers of large-scale protests against the coup. Some labour leaders were detained by the junta and other leaders had to run away. Consequently, unions are unable to function properly in the country. This has also led to some employers turning a blind eye to labour rights.

Many employers started to mistreat their employees by not paying them their full salaries. The employers also stopped paying them for overtime work and started dismissing them without full compensation.

Reportedly, many forms of labour abuses are happening in the Yangon industrial zones. Yangon is the biggest city and industrial hub of Myanmar, with the highest concentration of workers.

According to the International Labour Organization (ILO), over 1.6 million people became jobless in Myanmar after the Covid-19 pandemic and the military coup in 2021. Approximately 10 per cent of Myanmar’s workers were employed in manufacturing. About 350,000 worked in construction. Nearly 220,000 worked in the garment industry and more than 80,000 worked in the tourism industry.

The garment sector employs the most people in Myanmar. However, currently, the garment industry is the worst industry for labour rights violations. Reportedly, some employers have started abusing their workers in this sector.

According to the law of the country, the minimum daily wage is 4,800 kyats, but some factory owners are only paying their workers 3,600 kyats a day. They also make them work overtime without any additional payment. The workers are also drinking tap water as employers are not providing them with clean water at the office. They are only allowed to go to the toilet at certain set times.