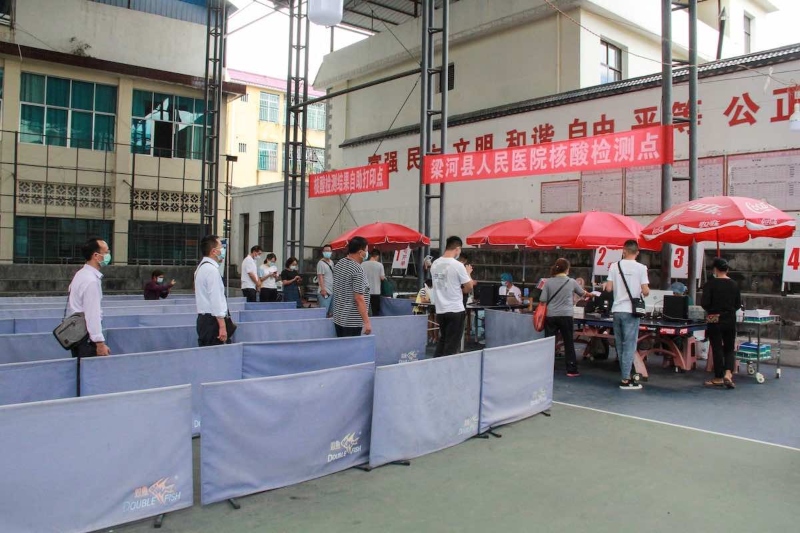 China – “Calm down, you’re overthinking things!” Ji reassures his clients while he cleans a sixth-floor window by sticking more than half of his body out of it.

It’s June 2, one day after Shanghai’s lockdown was lifted to contain the city’s newest coronavirus outbreak, and Ji, a migrant worker from adjacent Jiangsu province, is back in the workforce.

A couple has hired the 51-year-old repairman to clean their window and mend few other household equipment. He will be compensated with 200 yuan (£30). Ji doesn’t seem scared as he dangles partially outside the window. For him, the prospect of being able to work again has outweighed any fears.

It’s reassuring. “I haven’t had any employment for two and a half months, so it’s nice to be able to go out and make money again,” he says.

Shanghai citizens have been subjected to the largest-scale citywide lockdown in China since the onset of the pandemic over the past two months. Almost all commercial and social activities came to a halt as nearly 25 million people were confined to their homes. The lockdown in Ji’s neighborhood lasted even longer, starting two weeks before the rest of the city.

In 2021, China’s metropolitan and city districts had more than 292 million Chinese migrant workers. Migrant workers make about a third of the country’s labour and are classed as such under the stringent “hukou” household registration system, which mandates residential rights such as migration and taxation.

More over 4.5 million migrant workers were registered with employment in Shanghai in 2019, according to official data. During the lockdown, the majority of this group had no work and got no government aid. Ji says he envies office workers who can work from home and yet make a living.

“It’s a challenge.” These restrictions impact migrant workers like myself the most because we have to work very hard to make a life. Under normal conditions, we don’t have much in the way of savings. “In my instance, I have two parents to support, and my son recently married, for which we still owe money due to betrothal gifts,” he explains.

Ji was able to make it through the lockdown thanks to a friend who loaned him 10,000 yuan to help with rent and costs. “We need at least 100 yuan to meet our daily expenses on average, so the money came in handy.”

Nonetheless, the loan has increased his debt, and Ji claims it is difficult for him to obtain work because he is prohibited from entering some areas of the city. Ji is uncomfortable when asked if he has considered leaving Shanghai, where he has lived for more than 30 years.

“A part of me wants to leave, but I can’t afford to be quarantined for 14 days at my own expense if I go home.” Besides, I have all of my tools with me in Shanghai, and bringing them back home would be prohibitively expensive. “So, for the time being, I’ll continue to try my luck here and take things one day at a time. I’m just hoping there won’t be another massive lockdown here, otherwise I’ll have to leave,” Ji adds.

While Ji is optimistic that he would be able to make it in Shanghai, Gong, a 54-year-old senior carer from Yangzhou, Jiangsu, is more desperate.

Gong is waiting for potential clients on her e-bike, which is positioned in the shadow of a bus stop in the afternoon sun. Five other migrant workers accompany her, including three men and two women who work as junk merchants and senior carers, respectively. They’ve been coming to the same crowded place every day this month in the hopes of finding job, but few people stop to inquire.

“We haven’t had any business since the reopening,” Gong stated on June 9 as she turned around to double-check with a garbage merchant behind her.

During the lockdown, this group of migrant labourers, like Ji, had no income. However, carers continue to suffer as nursing facilities remain closed and many individuals are too afraid of Covid to seek help.

“We’re going through a rough patch,” Gong explains. “Due to the lockout, the nursing centre where we used to work closed and has yet to reopen.”

“We have no idea when it will reopen, and we can’t wait. I’m already two months behind on my rent, so I’m in severe need of work.”

Gong says her heart is still fluttering with terror as she recalls her ordeal over the last two months. Access to food became more difficult when jobs dried up during the shutdown. Governments provided little amounts of food, and some items could be purchased online.

“For a long time, all I ate was rice, and I was down to my last grain.” Thankfully, one of my neighbours heard about it and shared some rice with me, as well as teaching me how to join in online group-buying.” Despite this, Gong claims that the higher-than-usual grocery prices have depleted her funds.

In the metropolis, the prospect of a new Covid breakout is still very real. Although health officials denied rumours that a citywide lockdown will be implemented on June 20, restrictions have been reimposed in select Shanghai neighbourhoods as new cases surface.

Gong claims that she and other employees “will not be able to survive another lockout.”