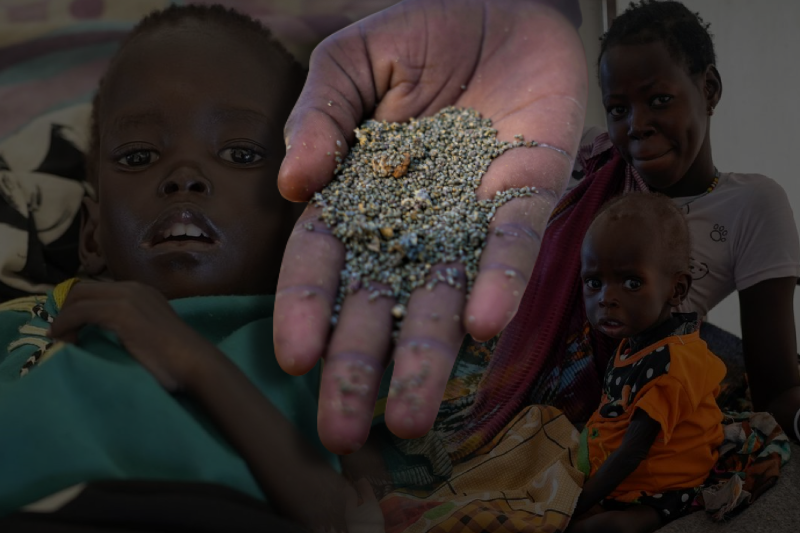 South Sudan – is facing a deadly famine. The disastrous flooding has destroyed the crops and lack of adequate food assistance from government and aid groups has been adding to catastrophic hunger crisis in the African country. It has been two years since coalition government was formed in South Sudan, an attempt to impose a rather fragile peace deal in country ending five year civil war. But all the government has done is push the country further into famine ditch.

36 year old Nyayiar Kuol shares her story while cradling her 1 year old daughter, who is severely malnourished. Living in rural South Sudan, Kuol has to travel 16 hours to nearest hospital. Kuol hasn’t been able to feed her four children all meals in a day, surviving on just one meal a day. Failed crops, no food assistance. The factors that have brought Kuol to a stage where she thinks her daughter might die. Blaming government for failing to do what’s needed for people, she said, “I don’t want to think about what could happen.” She added, “If this country was really at peace, there wouldn’t be hunger like there is now.”

Aid groups have warned that this year would be the most catastrophic for South Sudan – more people will die. Famine due to worst floods that have hit the country in 60 years, internal civil conflict, and delayed implementation of peace deal has denied the country with its basic aid and people the basic human rights. “2021 was the worst year since independence in the 10 years of the life of this country and 2022 will be worse. Food insecurity is at horrific levels,” said Matthew Hollingworth, country representative for the World Food Program in South Sudan.

Aid officials have noted that preliminary data shows nearly 8.5 million people, out of the South Sudan’s 12 million population, are predicted to face severe hunger. This would be an 8% increase as compared from last year.

Floods have impacted at least 1 million people across the country, said United Nations. Last year UN had to decrease its food ais to South Sudan by half due to inadequate funding. This further impacted around 3 million. Disastrous two years due to floods have prevented cultivation. According to UN Food and Agriculture Organization, at least 250,000 livestock has been killed in Jonglei state of South Sudan alone.

Floods and famine have forced internal displacement of scores of people. “We’re eating leaves and look like skeletons,” Tut Jaknyang, the 60-year-old who has received food assistance only once since leaving Jonglei in July to flee floods.

Jill Seaman, who works in Old Fangak with the South Sudan Medical Relief concludes in frustration over condition of South Sudan, “There are no resources, no harvest, and no cows, there’s no place to look for food.”