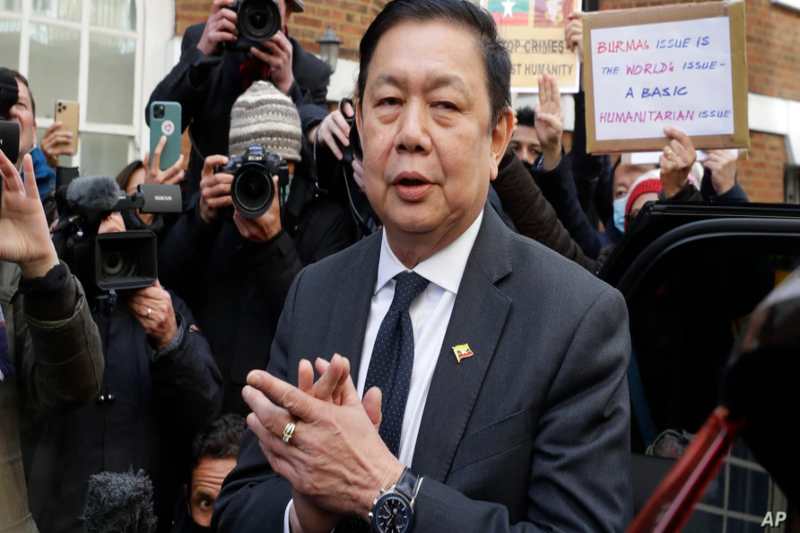 The British government came to the rescue of Myanmar’s former ambassador to UK, Kyaw Zwar Minn, who was locked out of the embassy for opposing military coup in his country. He slammed military junta’s take over of the country in February, and supported the democratically elected government. He was booted out on Wednesday for aligning with pro-democracy protestors. Minn had no place to go and ended up spending Wednesday night in his car before British government offered him shelter.

The UK Foreign Office said: “We condemn the way the Myanmar military in London barred their ambassador from entering the embassy on Wednesday evening. We pay tribute to the courage of Kyaw Zwar Minn in standing up for the people of Myanmar.”

“Given the bullying behaviour towards Mr Minn, we are seeking to ensure he can live safely in the United Kingdom while he decides his long-term future. We continue to call for an end to the coup in Myanmar and a swift restoration of democracy.”

Former Myanmar ambassador met British foreign minister Nigel Adams on Thursday and spoke against the hijacking of embassy by military attaché as an “unacceptable and disrespectful” move. While speaking to the reporters, he said, “This kind of coup is happening in the middle of the UK, in the middle of London – this shouldn’t be happening.”

The UK government extended its support towards Minn and even decided to raise the matter in an event it was organising for UN Security Council members on Friday. The British government said that it would be takin up the issue at the international event for the Security Council member nations “to hear the voices of those who speak for the thousands who’ve taken to the streets to demand democracy be restored, to hear views on what is happening in Myanmar”.

Labour’s foreign affairs spokesperson, Lisa Nandy, commended Minn’s courage to stand up against his country’s military regime and urged the UK government to raise the issue and exert maximum pressure on Myanmar’s illegitimate military rule to reverse the move. She said, “By standing up to the military junta, Kyaw Zwar Minn has shown immense courage and should be offered any appropriate support and protection. The UK must also intensify its work with international partners to increase the pressure on the Myanmar military to end the ongoing senseless and barbaric murder of pro-democracy protesters, extending sanctions and continuing to press for a wider arms embargo.”