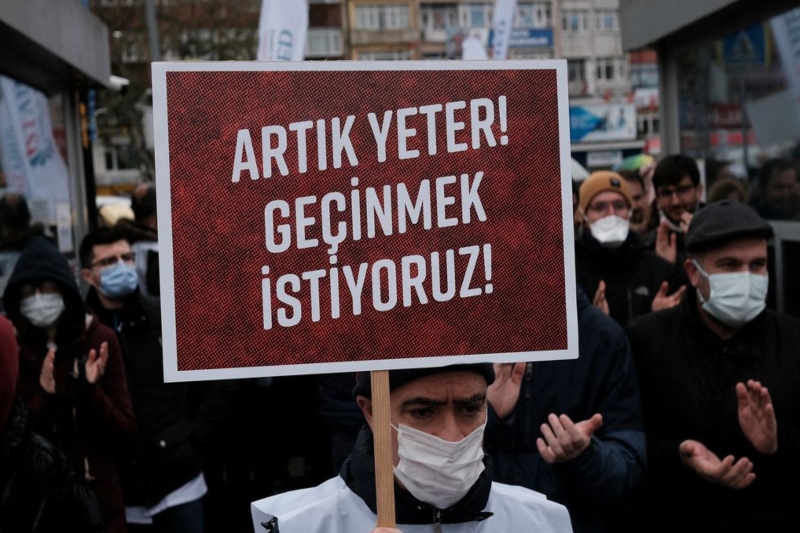 Turkey – The economic crisis in Turkey has reached to its streets with scores of delivery workers, grocery store employees and factory workers going on strike. Rising prices in Turkey has made many un-comfortable. In a tweet, by the leader of the Turkish opposition party he said that he will not pay inflated Electricity bills due to the price hike on basic commodities from January onward.

Small businessmen, Shop-owners and workers, all are facing the inflation issue to the extent of bankruptcy. Some shop-owners are protesting by posting their electricity bills on the shop-windows. It is getting difficult for the daily wage workers to survive amidst constant price increase, they are protesting all across the country for increasing the minimum wage rate. As a last resort, some people are leaving the country for better employment opportunities abroad.

With a soaring, 48.7 percent inflation rates, Turkey is facing the worst economic crisis in decades. The purchasing power of people has decreased due to double digit inflation. The protest by daily wage workers due to the increasing living cost and stagnating wages. The economic crisis has hit the country after President Erdoğan took power two decades ago.

As per the analysis done by few economists, the real inflation figures are almost double to the officially submitted numbers. Considering the current situation, Fitch Ratings, “cut Turkey’s sovereign credit rating further into junk, citing factors including the nation’s vulnerability to high inflation.”

The courier workers are going on strike across the country, in spite an increase of 50 percent in the minimum wages and the promises made to protect the workers against inflation, by President Erdoğan. The strike by the courier workers started at the Trendyol courier service demanding rise in line with the country’s inflation rate and their minimum living costs. The protesting workers have stalled the delivery activities and refuse to return to work, unless their demands are met.

A few later, after the Trendyol workers went on strike, they increased the salary of their online shopping website employees from 38.8 percent increases, from TRY 9,500 to TRY 12,500. There has been double digit price increase in basic facilities like gas, electricity, petrol and road tolls and food & beverages. As per a report by the Confederation of Turkish Trade Unions (Türk-İş) “Turkey’s poverty threshold increased to TRY 13,844 in January, more than three times the minimum wage [TRY 4,250].”