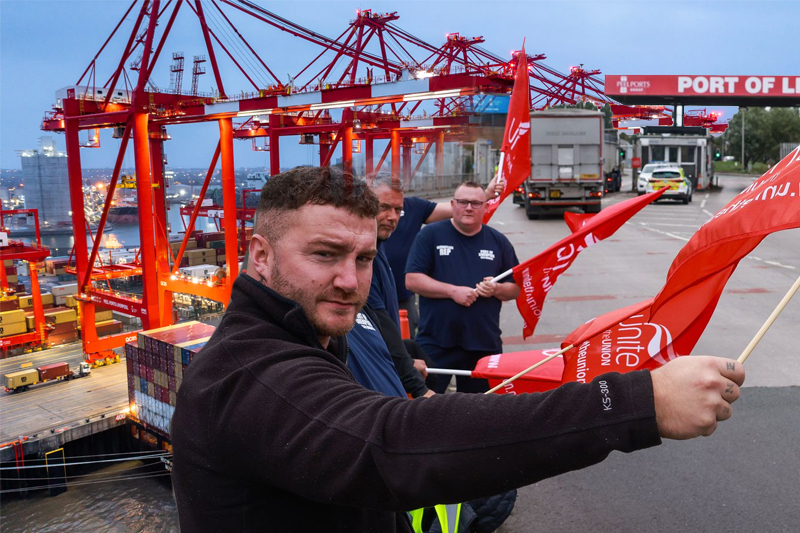 UK – Hundreds of dock workers went on strike over a wage dispute. Members of the Unite union at the Port of Liverpool left for two weeks, until 3 October.

Peel Ports Group, which runs the port, said the workers have waived a “significant wage package” that included an 8.3% raise and a £750 one-off payment.

Unite said it was a pay cut in real terms due to the rate of inflation and Peel could afford a higher raise.

Union general secretary Sharon Graham said: “Workers across the country are sick to death of being told to take a hit on their wages and living standards while employer after employer is guilty of rampant profiteering.” She said the port owners need to present a “reasonable offer and fulfill their previous payment promises.”

Sharing the video on Unite’s Twitter page, former Liverpool footballer Jamie Carragher said he “fully supported” the strike. “You’ve got my support and backing,” he said.

David Hack, COO of the port, said: “I am deeply disappointed Unite has rejected our significant pay package after many months of negotiation. This is bad news for our employees, families and other local employers. We fully recognize our colleagues’ concerns on the cost of living crisis, and that’s why we have responded with a pay package that represents a 10% average increase in annual pay.”. He urged the union to “work with us at the negotiating table” to find a solution.

The company said it has also committed to changing the shift schedule, which will result in a 25% reduction in night shift work. The firm added that the average salary for container operators would increase to around £43,000 a year.