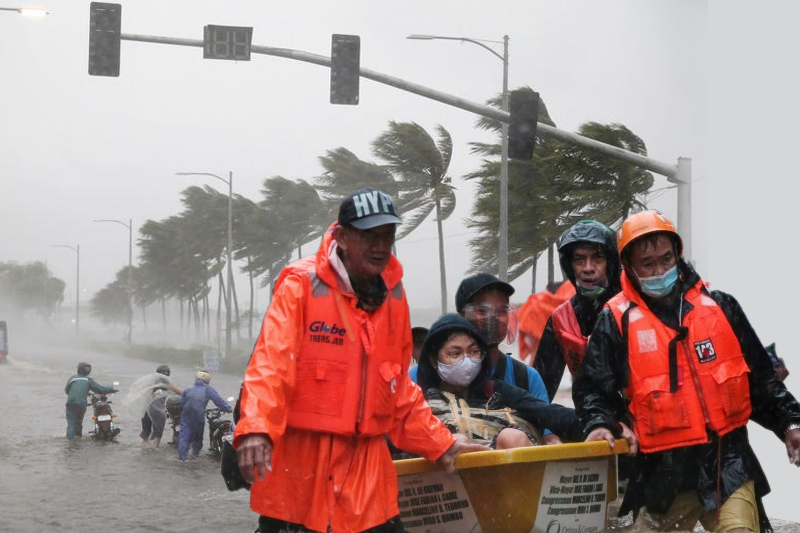 Philippines – The eye of the storm, known as Typhoon Carding, hit the Polillo Islands at 5:00 pm. local (5 a.m. ET) as a super typhoon and made landfall in Burdeos municipality in Quezon province shortly thereafter, according to the Philippine Atmospheric, Geophysical and Astronomical Services Administration (PAGASA).

Typhoon Noru hit the main Philippine island of Luzon on Sunday, triggering warnings that strong winds and heavy rain could cause catastrophic flooding.

The storm was sustaining winds of 240 km/h (149 mph) with gusts up to 295 km/h (183 mph) at the time, according to the Joint Typhoon Warning Center. It has since weakened slightly to a Category 4 typhoon, the Joint Typhoon Warning Center said in an update around 9 a.m. ET, but is still “causing extremely dangerous winds, storm surges, heavy rainfall and catastrophic flooding” in central Luzon.

PAGASA reports that the typhoon is forecast to move in a westerly direction over the next 6 to 12 hours and then in a west-northwest direction for the rest of the day. There is a high or very high risk of storm surge over 3 meters high in the low-lying and open coastal areas of northern Quezon Province.

In the coming hours, heavy rains are also expected along the typhoon’s path. “Under these conditions, widespread flooding and rain-induced landslides are expected, especially in areas that are highly or very highly susceptible,” PAGASA said. Authorities previously issued an emergency warning as the storm reached super typhoon status early Sunday morning local time after suddenly intensifying.

PAGASA has issued a Level 4 warning for the Polillo Islands in anticipation of significant damage that could be caused by the storm. The warning came after the storm intensified rapidly early Sunday morning. The Joint Typhoon Warning Center said it went from a 140 km/h (85 mph) typhoon to a 250 km/h (155 mph) super typhoon in just six hours. PAGASA has also issued Level 2 and Level 3 warnings for most of Luzon, including Metro Manila.