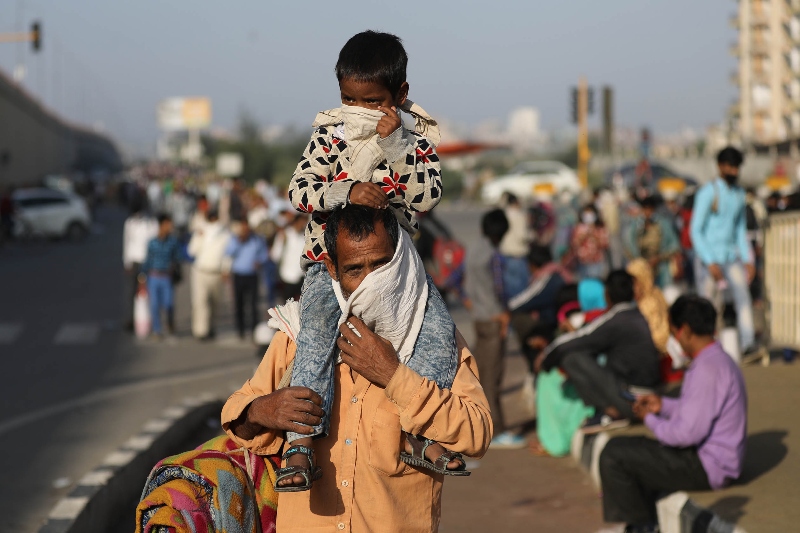 In the Indian constituency, migrant workers are a large part of the informal sector, employing near about 93 percent of workers. They contribute nearly 50 percent of the economic output in the country. Since the pandemic hit India, there has been no policy and no concrete framework for migrant laborers. They are going from place to place in search of jobs and shelter. A country like India, which the world’s second-largest democracy of the world, has stooped down so low that it has left the poor people out of the picture.

The lockdown imposed in March this year once again fueled the most disruptive migration in the Indian subcontinent that witnessed migrants walking barefoot for days at a stretch only to reach home in their village. Just like last year, this year too migrant workers are once again facing unemployment, food insecurity, the wipe-out of savings, and the rise in debts. Troubled with fear and panic, they have thrown allowed-19 caution to the winds and are rushing home in huge numbers using transport such as bus and trains. Six states namely Bihar, Chhattisgarh, Jharkhand, Odisha, Uttar Pradesh, and West Bengal are accounted for about two-thirds of reverse migration in the first lockdown are witnessing a similar situation again this year as well.

As a measure to improve the lives of migrant workers, some states have begun to reserve jobs for their residents, in the face of the economic crisis. In March 2021, the Haryana government notified a law to reserve 75 percent of private jobs for local people. Maharashtra, Madhya Pradesh, Andhra Pradesh, and Karnataka have also proposed requesting similar provisions. However, Article-19 of the Constitution allows citizens to freely migrate and seek employment anywhere in the country. Butdomicile-related provisions will restrict opportunities for migrant workers and go against the recommendation of2017 working group that pointed that states must actively remove all domicile provisions in laws relating to work.

The government is working to stabilize the situation but given the size and population of the country, it is a massive task to handle everyone. To make households more self-reliant, governments need to focus more on skill upgrade programs for unskilled laborers under NREGA. They should implement skill-mapping exercises so that they can help the worker secure a job closer to his home.

And, above all, the creation of robust digitized migrant data can enable governments and policymakers to take appropriate welfare measures in the long run.