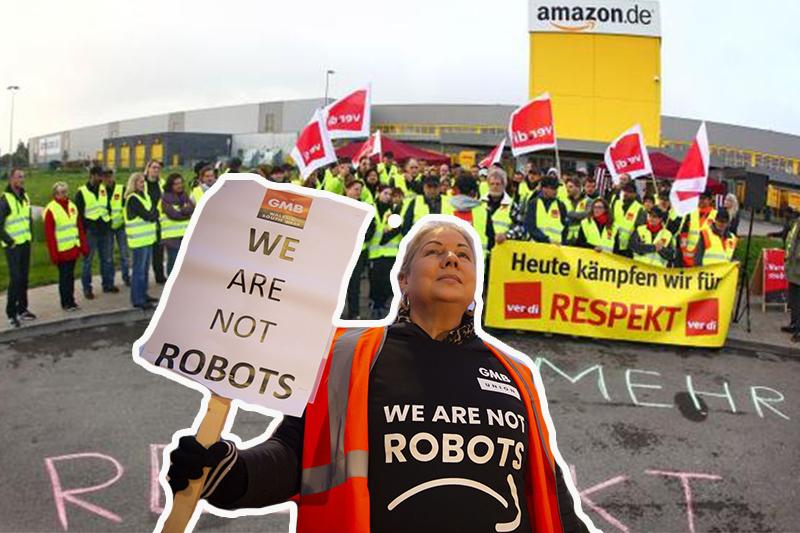 how amazon imported working conditions from america into europe

Europe – On May 14, 2013, there was the first full-day strike at an Amazon warehouse. In total, 700 employees demonstrated in front of three locations in Germany, the company’s major international market. They wanted more pay, more long-term contracts as opposed to short-term ones, and an end to productivity quotas while carrying banners that said, “Today we fight for RESPECT.”

At the three strategically placed fulfillment hubs, a third of the employees were unemployed, a surge of collective action that Amazon had never experienced before. Andreas Gangl, who began working in the returns department at Amazon’s warehouse in Germany in 2008, stated it felt like a momentous day. “I believe that was the best day ever,” she said.

Amazon, which has always fought unionization efforts, appeared to be in a state of shock. Under the strict labor rules of their nation, the strikers, who had formed a union two years previously, were granted considerable concessions: The hourly rate increased from 9.83 to 11.62 euros.

According to the union’s estimates, the corporation reduced its reliance on temp agency workers from approximately 75 percent of the workforce to 25 percent, replacing them with workers who received full corporate benefits and lengthier entry-level contracts. And in all three of the striking warehouses, Amazon has promised to stop dismissing employees for not achieving productivity requirements.

But the huge retailer was cooking up another scheme. Amazon indicated that it would first enter central Europe two months after the initial German strike. In the following eight years, the business established 12 fulfillment facilities in Slovakia, the Czech Republic, and Poland, which are nearby. More than 30,000 workers in those three countries currently produce goods for clients in Western Europe for less than half the pay of their German counterparts and without any of the labor protections that the Germans had just won.

For at least a third of warehouse employees, internal data showed that production goals were increasing every week. Employees at three locations in central Europe told that they frequently saw other workers pass out from weariness. Four workers claimed they received criticism for attempting to organize or promote improved working conditions. In Szczecin, Poland, a former HR official claimed to have fired hundreds of workers over a year, some of whom had taken more than three sick days in a single month.

Central Europe had an extraordinary expansion. Although a Polish site launched in 2021, the other two countries still do not have an Amazon website. For years, only Poland, Czechia, and Slovakia had Amazon warehouses but no Amazon websites. For the first time, the business entered nations just for their labor pools and had no desire to tap into the local markets.

The strategy worked. With daily deliveries of tens of thousands of items to Germany and other Western European nations, the warehouses in Poland quickly rose to the position among the company’s most productive locations worldwide. The tactic’s success was evidence of a model Amazon has been refining for years; the business built its greatest volume of fulfillment facilities by taking advantage of lax enforcement practices in nations with labor standards comparable to those of the US, where it initially became a market leader.

According to a former senior manager in Poland who requested anonymity due to fear of retaliation, Amazon is able to run an operation in Poland that is ‘more similar to what the US is doing’. It exported efficiency strategies developed under American labor rules as it expanded through Poland and Central Europe. The Amazon fulfilment centres, which are among the largest warehouses in central Europe, were warmly welcomed by the local workforce and featured a state-of-the-art cafeteria with big-screen TVs, gaming consoles, and vibrant chairs, in addition to a forest of yellow shelves showcasing the company’s unmatched inventory. The introduction of Amazon signaled a new phase in the transition of their nations from the former East Bloc communist to Western-style capitalism for a generation of workers who were raised during the Cold War.