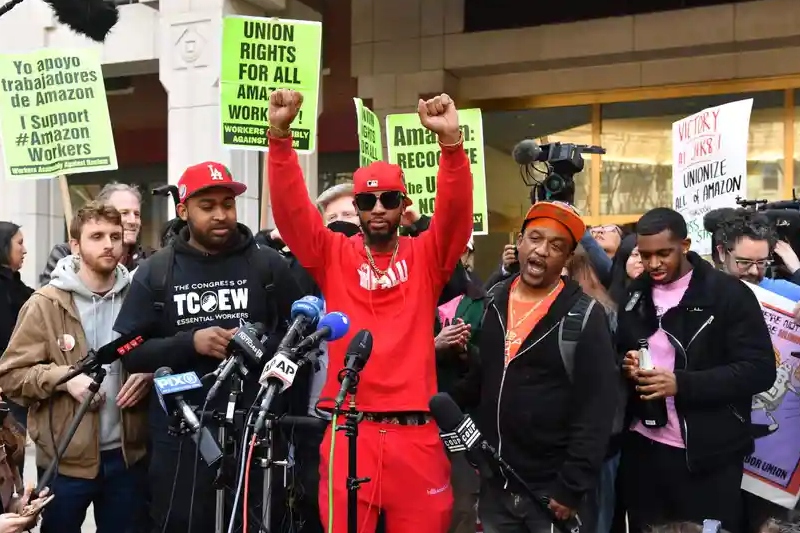 amazon new york gets first ever labor union in 27 years

United States – The big e-retail company Amazon finally has a workers’ union. Amazon was not happy with this and in its history, such an unprecedented support for a workers’ union has not been seen as it did see last week.

It has started in Staten Island, New York where workers have voted in an overwhelming number for unionizing to come through, with Amazon Labor Union (ALU). This is the grassroots labor organization that was started by its first employee that was sacked by Amazon under false pretexts. Christian Smalls was protesting against Amazon’s pandemic response and sat in a walkout. Two years ago, he lost his job and was termed as unfit and incompetent. He along with the current and former Amazon employees of the facility started the ALU.

The move marks the first time a group of US workers have successfully voted to form a union in Amazon’s 27-year history. Its not a perfect method but it has worked and shown Amazon that workers don’t trust its organization and wants things under its control too. Further, the move has (apparently) been seen to have the potential to motivate workers at other warehouses to unionize, labor experts say, and perhaps to rethink more conventional tactics for doing so. It could also supercharge the broader labor movement in the United States.

This is a huge victory in labor rights for many had complaint about mistreatment at the hands of the management, especially in times of Covid-19. Lockdown did not mean fair working conditions for the workers in various Amazon facilities. As e-retailing was on the boom, workers were being made to work overtime, without proper food or toilet breaks, lack of proper sleep and rest, leave alone absence of proper protective gears too.

Amazon has previously said in statements that its “employees have always had the choice of whether or not to join a union,” while spending $4.3 million just last year on anti-union consultants. In a recent statement, the company indicated it will explore its options to challenge the results rather than accepting that workers had voted in favor of the effort. (Both parties have until this Friday to file any objections.)