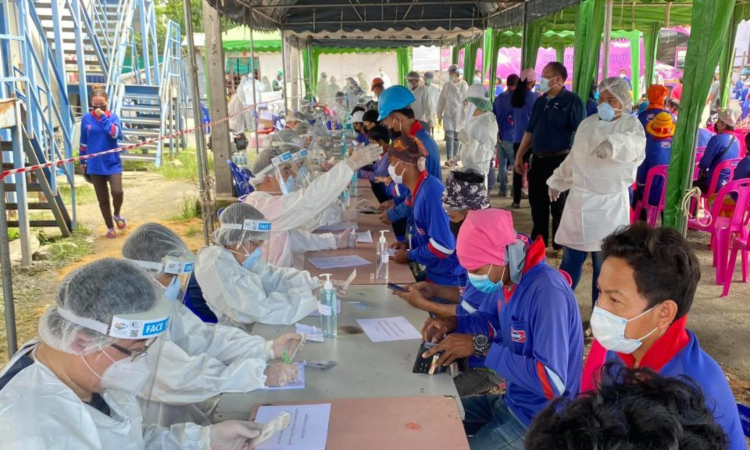 A serious outbreak has been disclosed as hundreds of construction workers contract Covid. They were employed by a company owned by Bangkok’s health company. These people have been sealed inside their metro Bangkok workplace. Among the 515 infected were 43 Thai, 207 Cambodian and 265 Burmese workers. There is a possibility that remaining workers could be just asymptomatic, but still, a careful search needs to be conducted the camp is accounted for over half of the nearly 1,000-strong workforce living there.

As the news spread of the virus outbreak at migrant worker’s camp in Nonthaburi’s Soi Phibunsongkram 7. Governor of Nonthaburi, Suchin Chaichumsak ordered to seal the place. This approach was adopted by Singapore last year when the virus outbreak reached its peak. Going by a similar way, Thailand’s response to outbreaks in vulnerable immigrant populations has been to cut them off from wider society.

This kind of situation in virus spread was seen in the prisons as well where they are overcrowded and people are unchecked. In recent days, mushrooming infections at the Cal-Comp Electronics in Phetchaburi province has approached 2,000 infected workers, mostly from Myanmar. They have been provided with makeshift pads to sleep on the factory’s floor and the factory remains sealed within until early June. The company said it would continue to pay the workers.

All the workers with COVID-19 are being treated at hospitals while the rest are ordered to quarantine inside the camp under close monitoring. Last week, high authorities of Thailand confirmed that another cluster with a so-called Indian variant at a construction site is found. It was seen in Bangkok’s Laksi district where about 500 workers have been reported ill. The variant had infected 36 workers – 21 Thai, 10 Burmese and five Cambodian. It is the first time the “double-mutant” variety that’s believed to be especially virulent has been found outside state quarantine after it was found in a pregnant worker who returned to Bangkok from Pakistan.

Health officials announced another 3,226 cases today, 882 of which were inside the prison system. Twenty-six more deaths were recorded. Earlier in May, Bangkok had accounted for almost half of the 64,891 cases in the third wave of infections that emerged from nightclubs in the capital city.