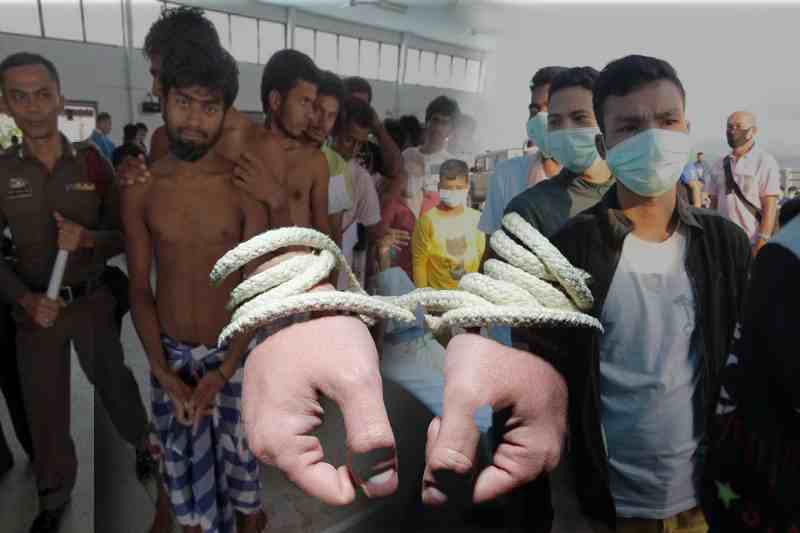 On Wednesday, Thailand police announced of having arrested 78 people this month over suspicion of smuggling over 260 migrant workers from Myanmar among other neighboring nations.

The crackdown was carried out under direct orders from Thai Prime Minister Prayuth Chan-o-cha. Authorities had blamed the surge of Covid-19 cases on migrant workers entered Thailand illegally.

National Police Chief, Police Gen Suwat Changyodsuk said during a news conference, “The operations are focused on trafficking rings – brokers and their masterminds – who smuggle illegal workers in or out. We are not focused on suppressing the illegal workers because the government has a clear policy on bringing some of them into the labor system and letting them work.”

Between January 1 and January 25, the crackdown led to arrests from five trafficking rings. The arrested are mostly Thai, with few from Myanmar.

Suwat said that surveillance cameras were used by the police that were fitted in the license plate. Along with face recognition technology use through cameras traffickers were identified on border roads and arrested. The most common routes used by the traffickers run from the border district of Mae Sot, Tak province, which is 480 kilometers from Bangkok, to the Thai-Malaysian frontier in the Deep South.

Police statistics indicate that in 2020 68,942 arrests were made of illegal migrants, as compared to 208,791 in 2019, due to pandemic led border closure. But as Thailand started to bounce back to normalcy after limiting infection spread, migrants began to return back via illegal border crossing. As per health officials, many migrants also evade the 14 days mandatory quarantine period.

Maximum illegal migrants are from Myanmar, Laos, and Cambodia. The immigration bureau thus considered issuing them 2-year work permits after biometric information recording. Thai workers’ group have said that police must clearly announce that migrants would not be prosecuted. Adisorn Kerdmongkol from Migrant Working Group said, “If the government announces clearly that it waives punishment for those workers, all sides will feel comfortable and Thailand will see gains to its workforce.”

Almost 2 million migrant workers are applying to extend their work permits to a period of 2 years.