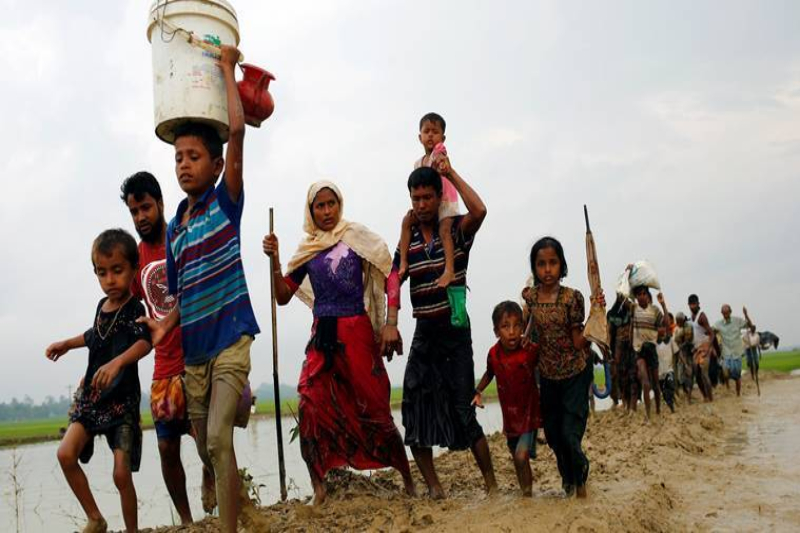 Bangladesh government is displacing the Rohingya population, much to their despair. As the monsoon season kicks in, there is reason for them to fear for their safety. The Rohingya’s refugees marooned here and there, are being asked to move to a Bangladeshi island. They might have reasons to feel displaced again. According to a formal statement by the Bangladeshi government, this is being done to provide them with better living conditions due to the incoming monsoons.

Their survival is already a huge problem due to the fact that they don’t have adequate water, sanitization, medical or educational facilities. They don’t even have proper housing.

As of now, about 18,800 refugees have already been moved from the Cox’s Bazar region, where around 850,000 people were living in squalid and cramped conditions after fleeing Myanmar. They were all shifted to the low-lying silt island of Bhashan Char in the Bay of Bengal.

From the Cox’s Bazaar area they are being asked to voluntarily move to the island. Some 80,000 refugee Rohingyas would have to move.  However, according to a Human Rights Watch report, as many as 167 of them said that they had been moved without being given full information and directions. They were not being allowed to return to the mainland either.

The 58 page report also spills the beans of how the monsoon makes them more vulnerable to torrential rains, related diseases, and possibility of flooding.

While the refugees are feeling grateful for the help they have received, Human Right organizations still feel their human rights need to be protected.   On its part, Bangladesh is finding it difficult to cope with these huge numbers.

Bangladesh Foreign Minister A.K. Abdul Momen has hit back on the report and spoken openly to leading media agencies saying that “whatever resources we have, we have tried to provide the best service to these people.  I am sorry we are not as rich as the nation they come from. We cannot afford to provide more things.” Bill Frelick, the HRW’s director of migrant and refugee rights, agrees somewhat to these facts and has said that the international community of donors should assist the Rohingyas. But the other best option is that the refugees be allowed to return back to the mainland, if they wish to.