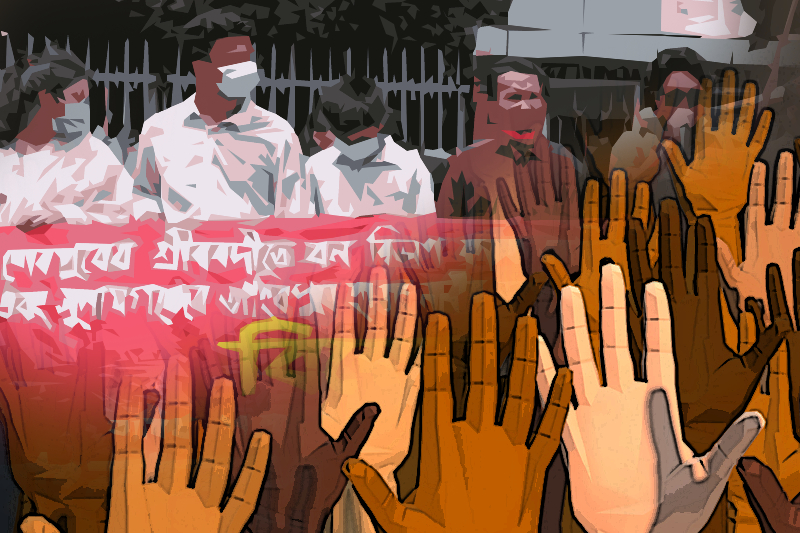 Bangladesh’s Adivasi Chhatra Sangram Parishad is demanding a separate human rights commission with the aim of putting an end to oppressive actions against indigenous women in the country. On Tuesday, activists and leaders of the group conducted a rally outside the National Museum in Dhaka to protest the rape of an indigenous woman belonging to the Hajong community in Sunamganj. Protesting against oppression of indigenous women, the activists demanded exemplary punishment for the rapist.

Call for provision of rights

As part of the protest rally, activists have issued a five-point charter of demands which include:

Speaking about the incident, experts underlined that oppression against indigenous women in the country has increased recently. Prof Khairul Chowdhury of Dhaka University’s Department of Sociology, expressed support to the group and called for the formation of an independent indigenous human rights commission to solve the problems of ethnic minorities in Bangladesh.

“Patriarchal society and culture of injustice are the main reasons behind such incidents in Bangladesh,” said Zobaida Nasreen, teacher at Department of Anthropology in Dhaka University.

She further urged the society to come together to fight against rape, noting that such crimes cannot be tackled only through protests.

At the same time, indigenous women are struggling to overcome the repercussions of the COVID-19 pandemic crisis in Bangladesh. As per reports, domestic violence against indigenous women in the country has increased in recent months as a result of job losses and pay cuts in the aftermath of prolonging pandemic-induced lockdown.

According to the Manusher Jonno Foundation (MJF), indigenous women in both hill tracts and plain lands are highly vulnerable to various forms of violence. MJF executive director Shaheen Anam stressed the lack of security facilities for indigenous women as a major concern for their safety in the region.

“Due to various discriminatory policies and patriarchal system of society, indigenous women are not being involved in the decision-making process,” Falguni Tripura, coordinator of Bangladesh Indigenous Women’s Network, said during a recent event.