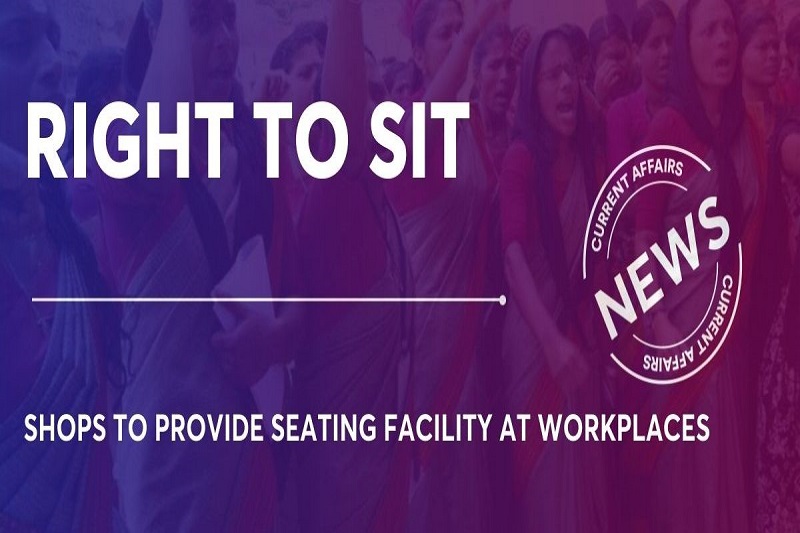 The Tamil Nadu Shops and Establishments (Amendment) Act, 2021 was formally presented in the Tamil Nadu Assembly by the Indian state’s government on Monday. The bill mandates shops, storefronts and commercial firms to provide all their workers seating facilities. The “Right to Sit” Bill was presented by Labor and Employment Minister C.V. Ganesan, a move lauded by state’s workforce.

What is “Right to Sit” Bill?

The bill is inspired by a Kerala bill that was first presented in July 2018 and was later passed into a law in January 2019. The move came after Kerala’s women workers in textile industry protested against the harsh working conditions in 2016. In the Kerala Shops and Commercial Establishments (Amendment) Ordinance 2018, seating facilities were added as a new section in the Kerala Shops and Commercial Establishments Act, 1960.

“In every shop and establishment, suitable arrangements for sitting shall be provided for all workers so as to avoid ‘on the toes’ situation throughout the duty time, so that they may take advantage of any opportunity to sit which may occur during the course of their work,” says the new Section 21B of the Tamil Nadu Shops and Establishments (Amendment) Act, 2021.

The bill proposes amendment of the Tamil Nadu Shops and Establishments Act, 1947, that offers “regulation of conditions of work in shops, commercial establishments, restaurants, theatres and other establishments”.

Recent years have seen tough working conditions for Tamil Nadu workers in industries like jewelry and textiles. Workers are forced to stand in these sectors for 10-12 hours shifts and also denied timely toilet breaks. The plight of state workers led to the government proposing amended bill like Kerala’s that will avoid workers from “on the toes” working situation. A report in The Journal said, “Many large multi-department showrooms, leading textile and jewelry brands in Tamil Nadu presently do not provide chairs or stools for salespersons to sit during work hours. Due to this, they are forced to stand up to 10 hours or even beyond attending to customers, leading to physical strain and varicose veins.”