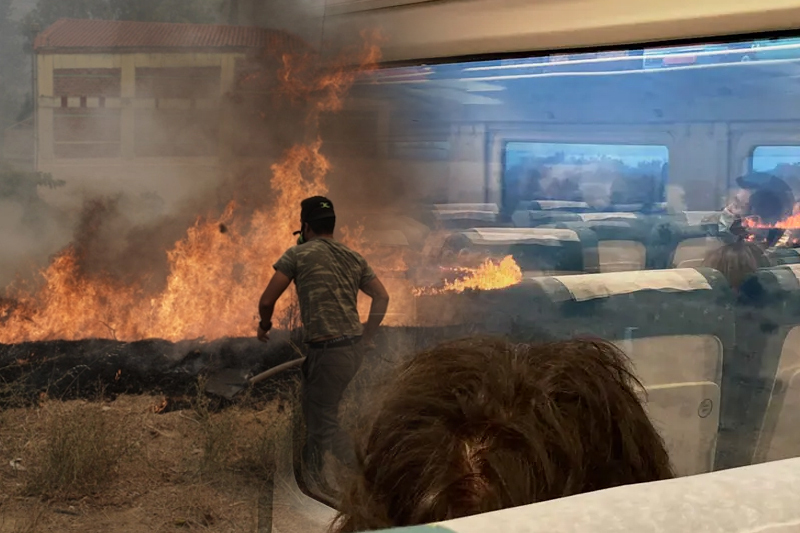 Spain – A fire near Bejis stopped a train from Valencia to Zaragoza in the north. The train driver asked the passengers to stay on board, but some panicked.

Ten passengers were injured and three seriously injured as they tried to escape from a train that was caught in a massive forest fire northwest of Valencia in eastern Spain.

A fire near Bezhis was picked up by strong winds, causing several firefighters to flee for their lives.

When the driver wanted to turn around a train that left Valencia late on Tuesday with 48 passengers on board, some smashed windows in an attempt to escape as the flames approached.

Some of the escapees suffered burns and one was airlifted to a hospital for treatment in Valencia. According to Spanish reports, a 58-year-old woman and a 15-year-old girl received the most severe burns.

None of those who remained on the train were injured.

The intensity of the fire was posted on social media.

The driver was able to get to the end of the train and took the train to the nearest station, Caudiel. Passengers who fled along the tracks joined the train, and the injured received primary medical care there.

More than 2,000 people were evacuated from Bezhish and nearby cities. The Castellón fire brigade shared a video showing firefighters escaping from a blaze several meters high as the wind changed its direction and threatened their lives.

Firefighters fear the blaze has destroyed up to 6,000 hectares (60 sq km) of land.

Anthropogenic climate change has led to more frequent and more intense heatwaves, and the world has already warmed by about 1.1 degrees Celsius since the start of the industrial age. All this causes frequent fires.

Rail passengers were also hit by a wildfire in Spain last month when a train stopped at Zamora in the northwest. The railroad operator said they were never in danger.