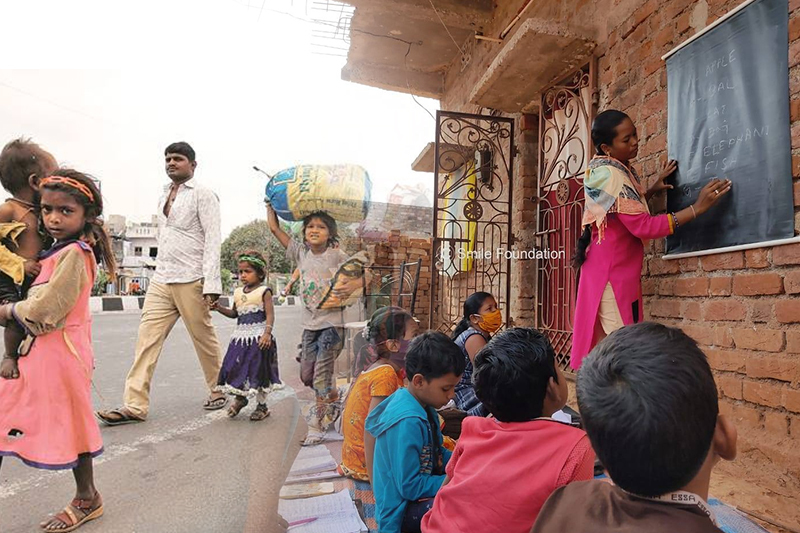 Dilip Kumar Anurag, 37, a brick factory worker from Bilaspur in Chattisgarh who moved to Bengaluru approximately a year ago, resides there with his wife and two of his five children in a kucha shanty. His other three children are living with their grandparents back at home. He creates 700–800 bricks each day at his 9–5 job at the brick factory, where he is paid Rs 700 per day for 25 days each month. Dilip claims, “I don’t work on wet days.” Additionally, he is not compensated when he misses work due to inclement weather.

Dilip’s 13-year-old son, who resides with him now, dropped out of school in the seventh grade. “However, I recharge his phone once a month, and he uses it to study,” claimed Dilip. Sushanth Chote Bacche: “Jab hum kaam pe rahte hain” (Sushank also takes care of the little boy, Amit, 13 months, while we are at work).

Sonu Kumar Auragi, 15, who is in class 9, is Dilip’s oldest child and is living with his grandparents in Chattisgarh. Anmol, who is Dilip’s daughter, is in class 2. Dilip declares, “I came here to find employment.” I lost my previous position as a bike mechanic in a garage in Bilaspur due to the epidemic. Providing for my family’s fundamental requirements of food and shelter is my top concern. After that, I’ll consider how to educate my kids.

Dilip’s children are unable to attend regular schools due to the uncertainty of their housing circumstances.

A similar predicament affects Raghuveer Joshi’s two kids, who are both from Chattisgarh and are 32 years old. In their hamlet, both children left school in class two. Raghuveer, who just moved here two months ago, asks, “Kahan school, kaise sab chalta, language kya, kuch pata nahi hai” (where school, what language). He makes the same amount of money as Dilip and works at a brick factory.

Prior to moving to Bengaluru, Raghuveer worked as a laborer, constructing “pooja pandals” during festival times and visiting his hometown to assist with farm work when needed. After finishing my career here, I’ll return to my hometown, says Raghuveer.

A significant portion of internal migration in India is temporary or seasonal. Their young children typically drop out of school or never start it as they move about in quest of employment. As a member of this community of transient migrants, Raghuveer’s kids are never able to attend school.

At a different building site, Vikas Kumar, 52, a native of Rajasthan who moved to Bengaluru 15 years ago, resides in a modest apartment in Sarjapur. He makes between Rs 20,000 and Rs 25,000 per month working as a bricklayer and tile installer. Vikas had to take care of three children when his wife perished in the second wave of the pandemic.

His 20-year-old daughter, Rupa Kumari, an intermediate-level graduate, is married. Manoj Kumar, 15, is in class 10 and Dinesh Kumar, 22, is pursuing a BA at a government college in Bengaluru. After working in the city for years, Vikas states, “Shuru me language nahi aati thi, magar yahan kam karte karte ab seekh gaye hain (Earlier, it was challenging to talk in the local language).”

Due to their failure to get documentation, such as local address evidence, and their inability to speak in the local language, newcomers like Dilip have a tough time gaining access to education for their children. Due to their extended stays here and some degree of consistency in their living arrangements, many like Vikas have overcome this.