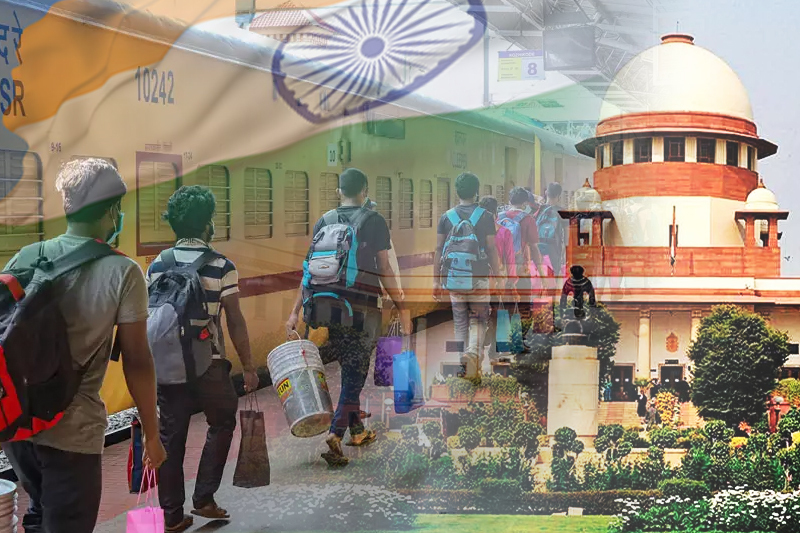 India – The Supreme Court ruled on Thursday that migrant workers are extremely important to the development of the country and that their rights cannot be overlooked at any time. The court also asked the government to develop a system to ensure that they obtain food without ration cards.

The court also noted that despite our progress, people are still dying from hunger, and that strategies should be developed to guarantee that the majority of migrant workers receive meals.

The state governments must collaborate with and support the Union of India, according to the supreme court, in order for the welfare programs developed by the Centre to benefit the greatest number of workers.

“Two persons are incredibly significant in terms of our nation. Agriculturists, or farmers, come in first, followed by migrant workers. Additionally, immigrants are crucial to the development of the nation. Their rights cannot in any way be disregarded. You must thus contact them. They could not know how to take advantage of government programs since they are illiterate. States that are concerned must make sure they receive the advantages of the scheme”, a bench of Justices M R Shah and B V Nagarathna stated.

“Each state’s department of food and civil services needs to set a goal for how many ration cards they intend to register. Since each state will have its unique requirements, this will need to be handled locally.

As of July 11, approximately 27.95 crore unorganized laborers or migrant workers had been registered on a portal created in collaboration with the National Informatics Centre (NIC) based on the data provided by states, according to Additional Solicitor General Aishwarya Bhati, speaking on behalf of the Central Government. The e-Shram platform has been developed with the intention of assisting individuals like migrant laborers, construction workers, etc., Bhati explained before the top court while outlining the measures taken by the Centre. She said that a National Career Service portal had been established, offering Indian residents a variety of employment and career-related services under one roof.

The ASG further informed the court that the government of India had established the Pradhan Mantri Shram Yogi Maan-Dhan (PM-SYM) pension plan for unorganized employees in order to provide for their safety as they age. Bhati stated that the Pradhan Mantri Garib Kalyan Yojana has been extended through September and that extra foodgrain allocations requested by the states are being investigated. She claimed that the Food Corporation of India allows states to purchase extra grains. At this time, Anjali Bharadwaj, Harsh Mander, and Jagdeep Chhokar’s attorney, Prashant Bhushan, claimed that the Centre was requiring the states to purchase rations at market prices.

Bhushan claimed that despite being enrolled on the platform, the bulk of workers are denied access to rations because they lack ration cards.

“Under Antyodaya Anna Yojana (AAY) and priority households, NFSA covers up to 75% of the rural population and 50% of the urban population. However, this figure is based on the 2011 Census. The population eligible for ration cards has grown by 15%, yet they are still in need, according to Bhushan.” The Supreme Court noted the submission and inquired as to whether or not rations can be denied to the needy just because a census has not been conducted.

“You (Centre) are using statistics from 2011, which may be unfair to those in need; you should look into it. They ought to be treated like your siblings and sisters. What about individuals who have registered but do not yet have ration cards? Will you still give them the ration? “You need to consider your options and find a solution that would help as many workers as possible. You must adjust the standards and reflect on this. The state governments should make every effort to provide ration cards to immigrants. We are unable to close our eyes,” the bench said.